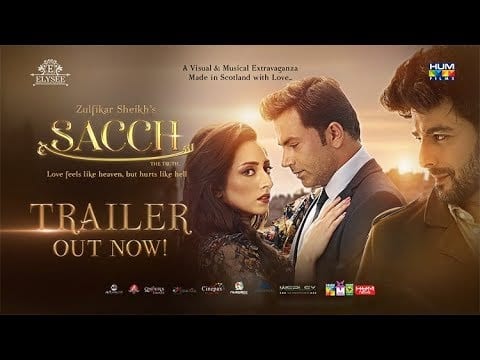 It’s hard to know where to begin with film producer Tasmina Shaikh’s debut movie without spoiling the storyline for cinema-goers but there’s a lavish dose of Bollywood drama with an equally dramatic Scottish backdrop and it was a magnificent experience of soaking up the Scottish flavour at the Edinburgh Premiere.

Naturally, there’s lots of music, some scintillating dance scenes and a love triangle with challenging family values at the heart of the story, so bring lots of tissues along with the popcorn.

If Shaikh’s name sounds familiar she has acted in a number of popular Urdu drama serials including ‘Des Pardes’ (1999) and ‘Castle: Aik Umeed’ (2001) but in her native Scotland she’s probably better known as a fiery SNP politician who was invariably at the heart of Westminster drama during debates concerning Scotland in the House of Commons.

Her passion for Scotland is reflected in the scenery of Sacch as the storylines unfold in Glasgow and Edinburgh and some of Scotland’s finest dramatic scenic landscapes drawing in lochs, rivers, coastlines and mountains.

Although she is the film’s producer Shaikh also appears on the silver screen next to her daughter Elysee, who makes her own acting and singing debut and does it very well. With such a forceful character as Sheikh behind the scenes, it is not surprising all of the female screen roles portrayed reveal strong, independent characters. And to keep it in the family, Sacch is also directed by her husband, actor Zulfiqar Sheikh.

The film was shot in Scotland and scripted by award-winning Bollywood screenwriter Kumud Chaudhary. The dialogues are written by celebrated Pakistani playwright Hasina Moin, who has worked for the Sheikhs previously as well and for non-Urdu speakers like me, there are English subtitles.

Music has a strong presence in the film thanks to composer and Indian musician Simaab Sen who successfully blends an impressive mix of Bollywood and Pakistani singers, including the celebrated Armaan Malik and Rahat Fateh Ali Khan.
https://youtu.be/uAkK6EKkk6w
The film clocks up a number of firsts including one from me – this was my first ever Bollywood premiere and now I’m completely sold on the glitz, glamour and drama; I can’t wait for the next one!
Next to the highly talented members of the Sheikh family, the biggest star for me was Scotland which did itself immensely proud with its distinct city architecture, dramatic mountains, lochs and natural scenery … there was even sunshine!
I can see Sacch being a huge hit in Pakistan and certainly a film the whole family can enjoy … just don’t forget to take a box of tissues along as well! It goes on release throughout the UK from January 10.
……………………………………………………………………….