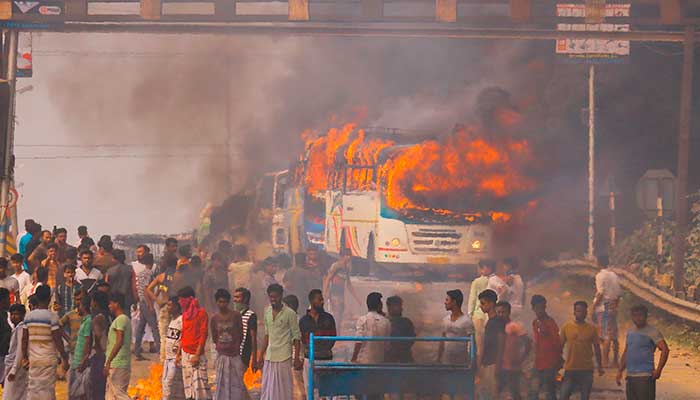 Six Muslims killed in India: The number of deaths from violent protests in India against a contentious citizenship law (CAB) has officially risen to six, but local sources suggest it is at least triple that.

Reports are sketchy at best as authorities maintained internet bans and curfews to quell unrest but our source confirmed these numbers to us.

Tensions are at a boiling point at the epicentre of the unrest in Assam state’s biggest city, Guwahati, with troops patrolling the streets in vehicles amid tight security.

Hundreds have been detained, illegally, to help the army and police quell any further unrest and the official figure of ‘six Muslims killed in India’ so far is to rise.

At least 7,000 people took part in a demonstration in Guwahati on Sunday, with hundreds of police watching on as they sang, chanted and carried banners with the words “long live Assam”.

India´s parliament Wednesday passed a contentious Citizenship Amendment Bill (CAB) amid violent protests and claims that it discriminates against Muslims as part of the Hindu-nationalist government´s agenda.

The legislation, passed by the national parliament on Wednesday, allows New Delhi to grant citizenship to millions of illegal immigrants who entered India from three neighbouring countries on or before December 31, 2014, but not if they are Muslim.

Protest have been going on for months in sporadic areas in India, especially since the cry of UN accused ‘ethnic cleansing of Indian Administered Kashmir’. Which India, took control of first and then introduced the CAB bill

In Assam, four people died after being shot by police, while another was killed when a shop he was sleeping in was set on fire and a sixth after he was beaten up during a protest, officials said.

In West Bengal state, where protests stretched into a third day, Chief Minister Mamata Banerjee — who has spoken out against the national government’s push for the law — suspended internet services in several districts.

Demonstrators set fire to tyres, staged sit-ins on highways and railway tracks, and torched trains and buses, with riot police brought in to disperse protesters and train services suspended in some parts of the east.

Home Minister Amit Shah called for calm, saying local cultures in northeastern states were not under threat, amid fears the new law will grant citizenship to large numbers of immigrants from neighbouring Bangladesh.