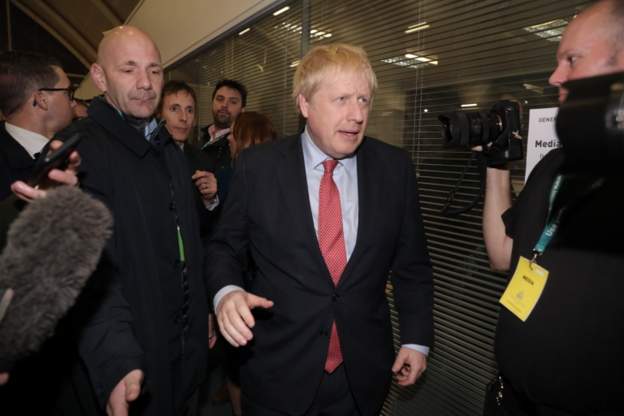 Boris Johnson election results in Uxbridge means he has held on to his seat with 25,351 votes with Labour’s Ali Milani running second winning just over 18,000 votes. And Lord Buckethead won 125 votes.

Boris Johnson says he “doesn’t want to tempt fate”, but it looks like the Tories have been given a “powerful new mandate to get Brexit done and unite this country and take it forward”.

The prime minister says he thanks for voters for turning out for a December election that looks set to be a “historic” poll.

There had been some doubt on whether Foreign Secretary Dominic Raab would survive this election, despite going into the polls with a majority of over 23,000.

Some thought the Remain-backing constituency could be won by the Lib Dems.

But he has come out on top again, winning the seat of Esher and Walton with 31,132 votes.

He says the result “gives us a chance to break the logjam and move this country forward”.

He says the Conservatives want to “hold seats in the South but also make sure we can speak to some of those aspirational middle classes north of the M25”.

The lib dem leader loses her seat to the SNP.

Lib Dem leader Jo Swinson narrowly loses her seat, with the SNP winning in Dunbartonshire East. She is a very young candidate only 27.