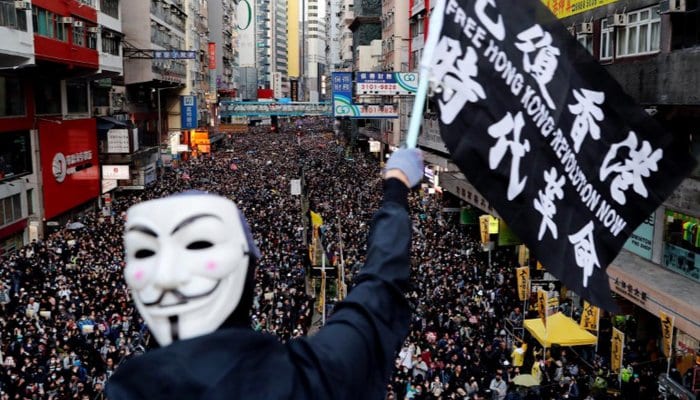 Crowds of black-clad demonstrators took to the streets in Hong Kong, on Sunday morning, in the largest anti-government protests since local elections last month that boosted the pro-democracy movement seeking to curb controls by China.

It was the first time since August that the Civil Human Rights Front, organiser of million-strong marches earlier in the year that paralysed the Asian finance centre, had received authorities’ permission for a rally.

It is estimated that the turnout was in excess of 900,000 while the police authority has played down the protest numbers to just under 200,000.

Chants of “Fight for freedom! Stand with Hong Kong!” echoed as demonstrators, from students to professionals and the elderly, marched from Victoria Park in the bustling shopping district toward the financial area.

As dark fell, some protesters spray-painted anti-Beijing graffiti on a Bank of China building. Riot police stood on guard, restrained as protesters yelled “dogs” and “cockroaches.”

The former British colony of 7.4 million people reverted to Chinese rule in 1997. It is governed under a “One Country, Two Systems” formula guaranteeing freedoms not allowed in mainland China, but many fear Beijing is tightening the screws.

“It’s Christmas time soon but we’re not in the mood to celebrate anymore,” said Lawrence, a 23-year-old student.

He held a poster saying: “My 2020 wish is universal suffrage”, a reference to demands for an open vote on the city leader, currently the unpopular Beijing-backed Carrie Lam.

Hong Kong’s protests started in June against plans to allow extradition to mainland China. Opponents and critics feared this could undermine judicial independence and endanger dissidents.

Until 1997, Hong Kong was ruled by Britain as a colony but then returned to China. Under the “one country, two systems” arrangement, it has some autonomy, and its people more rights.

The bill was withdrawn in September but demonstrations continue and now demand full democracy and an inquiry into police actions.

China blames the six months of unrest on interference by foreign governments including the United States and Britain. And have issues warnings to both countries and their respective intelligence agencies to ‘back off’.

On Saturday, two leaders of the American Chamber of Commerce in Hong Kong were denied entry to the neighbouring Chinese city of Macau, without explanation.