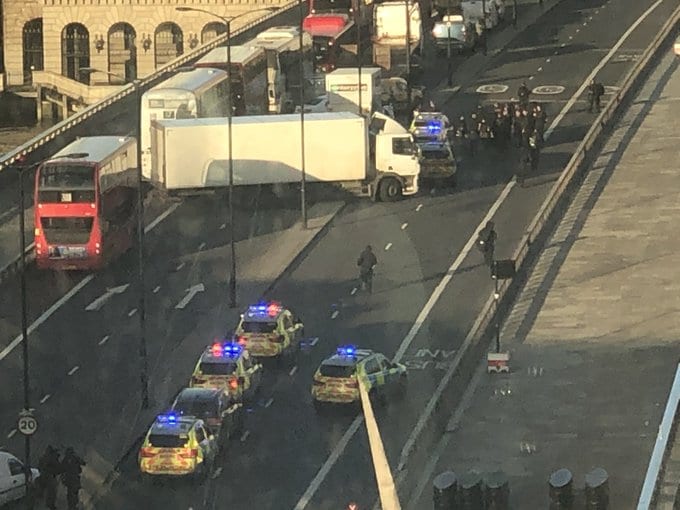 A video of people running off the bridge and vehicles trying to turn round.

At a press conference, Met Police commissioner Cressida Dick says: “As well as the suspect who was shot dead by police, two of those injured in this attack in the London Bridge area have tragically lost their lives”.

She also confirms that three people were injured in the attack.

One man has been shot dead by police and a numerous people were stabbed in a violent attack on London Bridge. Which. The Met Police have confirmed is being treated as “terror-related incident”.

The Met Police said officers were called to a stabbing at a premises near the bridge in central London just before 13:40 GMT.

A number of people have been injured, some seriously and one fatality.

Videos on social media show members of the public wrestling a man to the floor who then disperse before the man is shot by an armed police officer.

Another man in a suit and jacket can be seen running from him, having apparently retrieved a large knife.

The Met Police chased a man and shot him dead.

Scotland Yard has confirmed that police were called to a stabbing near London Bridge just before 2pm.

One man has been detained, and “a number of people” have been injured.

London Bridge has been cordoned off by police, with reports of hearing gunfire.

Here is a video of the gunfire breaking out and the commotion as people try to evacuate the area.

A group of men involved in a fight on the bridge starting firing as the Met police force arrived further shots were fired.

An unnamed person was stabbed in the initial altercation and then police gunned down and shot one of the suspects.

The Met Police confirmed that it was dealing with an incident at London Bridge and advised people near the scene to follow directions from officers on the ground.

The Met Police have dispatched armed response unit to the scene as London Bridge has been cordoned off from all areas.

You can see the lorry across the road #Londonbridge pic.twitter.com/q8eTstewaG

Major travel disruptions are expected in the area and those travelling to the area have been advised to seek an alternate route until further notice.