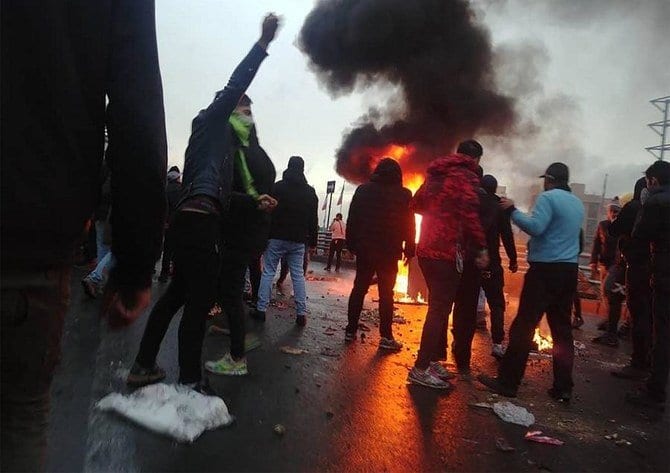 “The United States is with you.”

Amnesty International believes at least 106 people have been killed during protests in Iran over a rise in government-set gasoline prices.

The UN added in response to this finding that it is alarmed by reports of ‘significant’ death toll in Iran protests.

Iran’s government, which has not made nationwide numbers available for the toll of the unrest that began on Sunday, did not immediately respond to the report.

Amnesty added that it “believes that the real death toll may be much higher, with some reports suggesting as many as 200 have been killed.” citing “credible reports”.

Harvard scholar and Iranian affairs expert Dr Majid Rafizadeh said the international community must push for an emergency meeting of the UN Security Council in order to address the brutal suppression of civilians.

But the Iranian regime is adamant that these numbers are inflated and are being driven by the United States and Saudi Arabia. As propaganda via these humanitarian agencies.

US Support for Protests condemned

Pompeo said that the US supported the demonstrations that erupted in several cities across the country Friday after Iran’s National Oil Company announced increases of 50% to 300% in gas prices.

On Saturday, Pompeo tweeted: “As I said to the people of Iran almost a year and a half ago: The United States is with you.” He also retweeted his July 2018 statement of support for Iranians protesting against the “tyranny” of their government.

The fuel price protests come nearly two years after nationwide protests last gripped Iran over economic grievances. Those demonstrations were quashed by an intense crackdown which killed over 26 protesters on the streets and arrested more than 7,000 dissidents in 2018, according to Amnesty International.

Iran’s economy has buckled under crippling US sanctions since President Donald Trump withdrew from the country’s landmark nuclear deal in May 2017, unveiling a “maximum pressure” campaign to try to force changes in Tehran’s foreign policy. The country’s currency has since tanked, as prices soared and medicinal and food shortages became widespread.