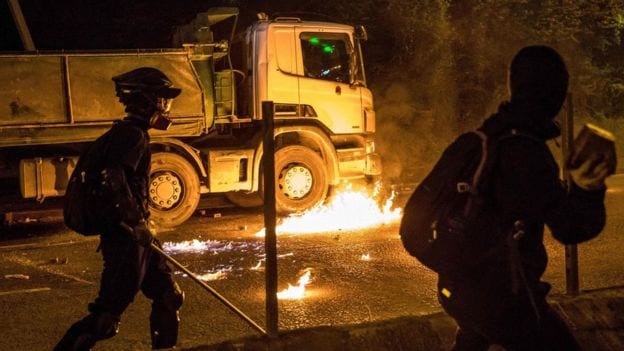 Another deadly clash on the streets of Hong Kong

A man has died as another deadly clash in Hong Kong between police authorities and protestors. The man was killed after being hit on the head during clashes between government supporters and protesters.

Officials said the 70-year-old man, was on a lunch break from his job as a cleaner when he was struck by “hard objects hurled by masked rioters”.

It comes as China’s President Xi Jinping said the “one country, two systems” system was being “challenged”.

China strongly condemned the incident and called for a thorough investigation.

Hong Kong has been dogged by more than five months of political unrest.

Less than a week ago, Alex Chow, a 22-year-old student, died after falling from a building during a police operation.

Police said protesters shot several arrows at them near Hong Kong Polytechnic University. None of the officers were injured, and six arrows were seized at the scene, police said.

A police superintendent told news outlet SCMP that he was not involved in the protest, but was “only taking pictures at the scene”. He died in hospital on Thursday.

Protesters have hurled gasoline bombs and thrown objects off bridges onto roads below during clashes at campuses this week. The Chinese University of Hong Kong suspended classes for the rest of the year, and others asked students to switch to online learning.

Anti-government protests have riven Hong Kong, and divided its people, for more than five months.

Hong Kong – a British colony until 1997 – is part of China under a model known as “one country, two systems”.

Under this model, Hong Kong has a high degree of autonomy and people have freedoms unseen in mainland China.

The protests started in June after the government planned to pass a bill that would allow suspects to be extradited to mainland China.

Many feared this bill would undermine the city’s freedoms and judicial independence.

Chinese authorities maintain the protestors are supported by foreign countries with a very specific British interference, however, the F&CO has denied that allegation.

The bill was eventually withdrawn but the protests continued, having evolved into a broader revolt against the police, and the way Hong Kong is administered by Beijing.

Another deadly clash on the streets of Hong Kong