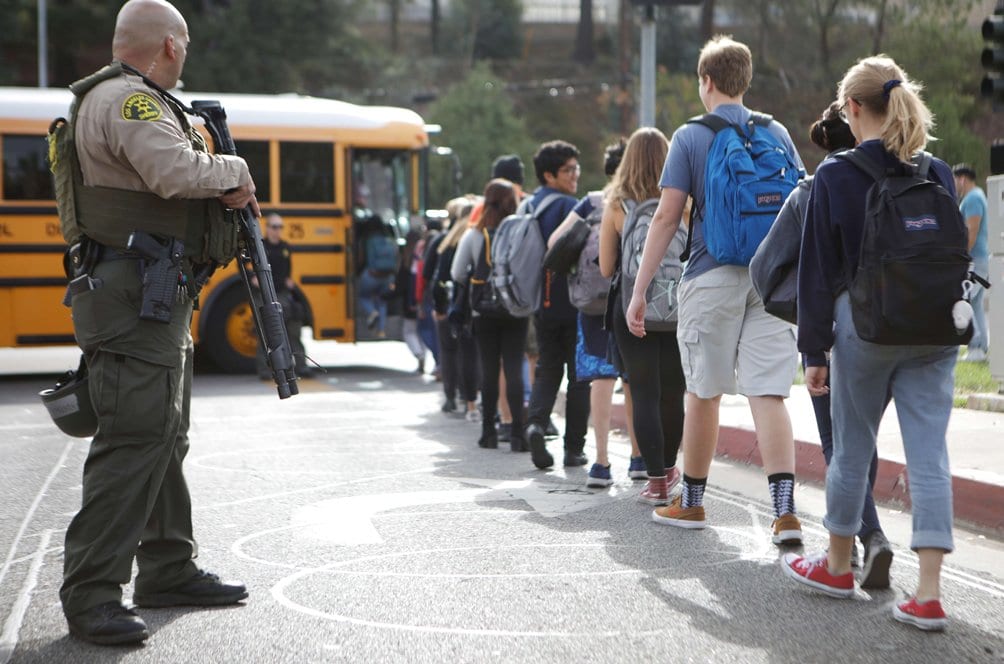 Breaking News: A teen whose birthday was Thursday went to his Southern California high school, pulled a pistol from his backpack and shot five classmates and himself in 16 seconds, authorities said.

The student pulled a .45 calibre semiautomatic handgun from his backpack and fired on fellow classmates on, killing two and wounding three others. He saved the last bullet for himself. It was his 16th birthday.

The teenaged gunman, whose name was not provided by police, survived the self-inflicted gunshot wound to the head but was in grave condition in hospital, law enforcement officials said.

Captain Kent Wegener of the Los Angeles County Sheriff’s Department told reporters the entire incident, captured on videotape, took 16 seconds as the young man stood in one spot and fired on one student after another.

“From right where he was standing, he doesn’t chase anybody, he fires from where he is until he shoots himself,” Wegener said.

The scene at Saugus High School was reminiscent of other mass shootings at US schools, including Marjory Stoneman Douglas High School in Parkland, Florida, where a former student with an assault gun killed 17 people on Feb. 14, 2018.

Wegener confirmed the suspect posted a message on his Instagram account before the shooting that said: “Saugus have fun at school tomorrow.” The post was later taken down.

This is the 85th incident of gunfire at a school this year. Such is the danger from gun violence that US students are trained on how to take cover in classrooms, but she and some others ran out because they thought the shooter was near where they would have hidden, she said.

“We ran through the fence, luckily it was open, and we got as far away from campus as we could,” she said.

The shooting at Saugus was the 85th incidence of gunfire at a school this year, according to Everytown, a gun control advocacy group. It seems sure to reignite a debate over gun control in the 2020 presidential election.

This year marks the 20th anniversary of the shooting at Columbine High School, where two teenagers went on a rampage, fatally shooting 12 students and a teacher and wounding more than 20 others before killing themselves.