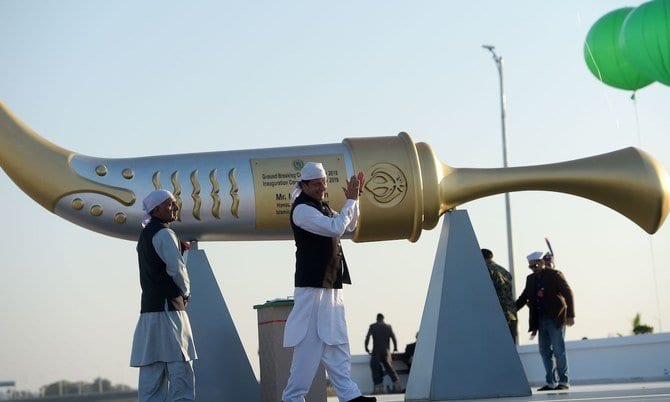 Hundreds of Indian Sikhs made a historic pilgrimage to Pakistan on Saturday, crossing through a white gate to reach one of their religion’s holiest sites, after a landmark deal between the two combative neighbouring countries of the subcontinent.

Cheering Sikhs walked joyfully along the road from Dera Baba Nanak in India towards the new immigration hall that would allow them to pass through a secure land corridor into Pakistan, in a rare example of cooperation between the nuclear-armed countries divided by decades of enmity.

Buses were waiting on the Pakistani side to carry them along the corridor to the shrine to Sikhism’s founder Guru Nanak, which lies in Kartarpur, a small town just four kilometres (2.5 miles) inside Pakistan where he is believed to have died. Some fathers ran, carrying their children on their shoulders.

Gurdwara Darbar Sahib, situated in Kartarpur, is the second holiest place for the Sikh community. This is 120 km away from Lahore and situated in a small village of Kotheypind at the bank of River Ravi — at a distance of only 4 km from Pakistan-India border.

When Pakistan was carved out of colonial India in 1947, Kartarpur ended up on the western side of the border, while most of the region’s Sikhs remained on the other side.

Celebrations for the Sikh Community

For up to 30 million Sikhs around the world, the white-domed shrine is one of their holiest sites. However, for Indian Sikhs, it has remained tantalisingly close – so close they could stand at the border and gaze at its four cupolas – but out-of-reach for decades.

“Imran Khan has created history with Kartarpur Corridor,” Qureshi said. “Kartarpur has been opened for Sikhs from all over the world.”

He congratulated the Sikh all over the world on the opening of the Kartarpur Corridor and welcomed the Sikh pilgrims present at their holy site.

It has been said in the agreement reached between Pakistan and India that daily five thousand Sikh Yatris (pilgrims) will be allowed to visit the Gurdwara through the Corridor.

For years India had been asking Pakistan to grant Sikhs access to the shrine. Among the first pilgrims was former Indian Prime Minister Manmohan Singh, who told Pakistani state media that it was a “big moment”.

The opening even inspired a singular message of gratitude from Indian Prime Minister Narendra Modi to his Pakistani counterpart Imran Khan for “respecting the sentiments of India”.

For his part, Khan said a day would come “when our relations with India will improve…..I am hopeful that this the beginning,” he told the pilgrims at the shrine.
For years India had been asking Pakistan to grant Sikhs access to the shrine.

Pilgrims will be charged $20 each under service charges. However, they will be exempted from paying the charges on the day of the 550th birth anniversary of Baba Guru Nanak.