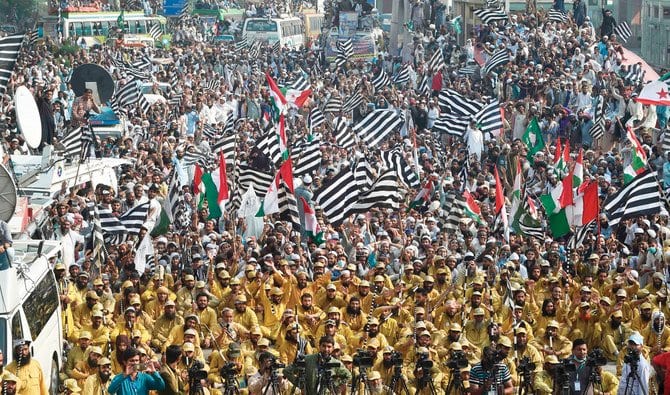 Pakistan Prime Minister Imran Khan faces the first major challenge to his leadership this week as a grey-bearded, orange-turbaned rival he calls “Maulana Diesel” marches to Islamabad with thousands of supporters hoping to bring down the government.

Tens of thousands of Islamists at a massive protest camp in Pakistan’s capital awaited a Sunday deadline set by their leader calling for the prime minister to resign.

The JUI-F chief was speaking to the crowd of Azadi March protesters at the H-9 venue when he said that the time was up for Prime Minister Imran.

“They are asking us to go and file complaints with the election commission,” he said. “Election Commission is even more helpless than us,” he added.

Fazl said that if the election commission was not so helpless, such a large crowd wouldn’t have assembled in Islamabad.

“We have decided not to go to any court or election commission,” he said. “Only a parliamentary committee will decide about rigging.”

Fazl said that a case of the PTI’s foreign funding was being heard by the Election Commission since the past five years but no verdict had been given on it.

Authorities in Islamabad strengthened the security around the camp as the protest entered its third day, including walls of shipping containers blocking roads leading into and out of the protest area, as well as deploying riot police and paramilitary forces.

Rehman was in Lahore on Wednesday and set to arrive in Islamabad later, but so far has refused to clarify what happens next.

It is a scenario Khan himself is familiar with. As opposition leader in 2014, he organized months of mass protests in Islamabad that failed in a bid to bring down the government.

With the ability to mobilize tens of thousands of madrassa students, JUI-F protests have a history of stirring unrest, and authorities are sealing off the capital’s diplomatic enclave with shipping containers.

A violent crackdown risks sparking a wider backlash in the Muslim-majority country, where mainstream politicians have long tried to keep the conservative.

Fazl issued a stern warning to Prime Minister Imran, warning him that his Azadi March would throw him away.

“If this flood decides to move towards the Prime Minister House, no one can dare stop it,” he said. “Imran Khan, listen to me. This movement and flood of people will force you out of the prime minister’s seat.”

Fazl criticised the prime minister and said that it was unfortunate that he was occupying such a coveted seat.

This is what Imran did during his time in opposition, he shut down highways and main roads with containers and brought the country to a standstill. Now that the shoe is on the other foot, how will he react? Lock people up or serve the democracy he craved?

“We know about you and your character very well,” he said. “We are also aware of ourselves and our characters.”

My Tweets
We use cookies to help identify your computer so we can tailor your user experience, track shopping basket contents and remember where you are in the order process. WTX News Our Cookie Policy
Addenbrooke’s drama leaves British journalism in intensive care
Daily News Briefing: A daily roundup of all the news headlines that you need to know!
To Top
Weekly