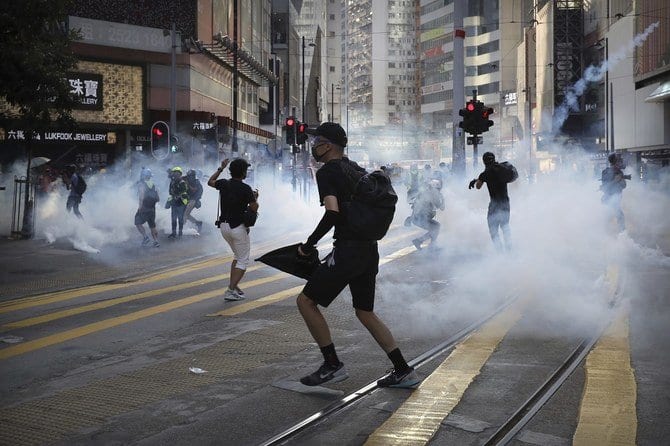 Protesters have taken to the streets for five months of sometimes violent unrest as night falls Hong Kong becomes a battleground; the people versus the Police.

Hong Kong police fired tear gas into a park to break up thousands of anti-government protesters who fled to the Central business district, setting fire to street barricades and metro stations in some of the worst violence in months of unrest.

Central, its streets lined with banks and top-end jewellery and fashion stores, became a battlefield after night fell, with running clashes between police and black-clad, masked activists.

A first aider was severely burned after teargas canisters exploded near him, Hospital reposts suggest he has suffered 3rd-degree burns.

Protesters are angry at perceived Chinese meddling with Hong Kong’s freedoms, including its legal system, since the city returned from British to Chinese rule in 1997. China denies the charge.

The fast-moving crowds headed to the park through the Causeway Bay shopping district, some pulling up metal fencing to build street barricades, their actions masked by others holding umbrellas. Activists threw at least one petrol bomb.

Many sang the British and U.S. national anthems, waving multi-national flags and a few calling for independence, a red line for Communist Party leaders in Beijing who have vowed to crush any such move.

Police using loud-hailers warned them to disperse, saying they would be prosecuted for holding an illegal assembly on the 22nd straight weekend of protest.

Police are also rounding up ‘protest leaders/organisers and arresting them before the next wave of demonstrations. This tactic was used by the French POlice in tackling the Yellow Vest movement.

As peaceful family protesters finished making origami paper cranes in Chater Garden, a cricket pitch in colonial days, activists began throwing petrol bombs on the streets, in front of the headquarters of HSBC and the Hong Kong base for the Bank of China.

Saturday’s rally in the park was not given official police permission, as is required, but that has not stopped people gathering in the past. Face masks were banned under a resuscitated colonial-era emergency law.