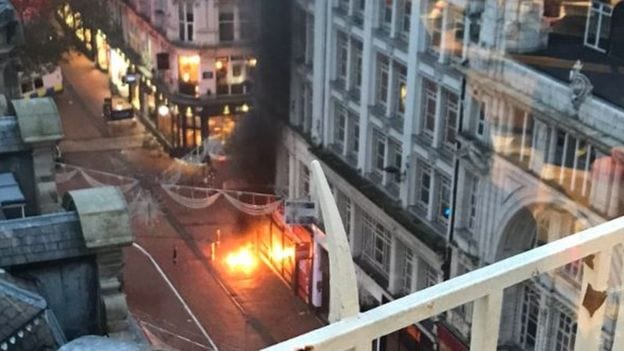 Underground fire rises above to surface level in New Street

A fire has broken out in Birmingham city centre, on New Street, one of the busiest and most popular streets with party-goers. It has been cordoned off after an underground fire reached above the surface in big flashes of flame.

Panic ensued as people expected and shouted explosion, as the area was being cordoned off by emergency services.

West Midlands Police said the flames were seen on New Street, Birmingham, shortly before 17:00 GMT and early reports suggest it was caused by an electrical fault below.

There are no reports of injuries, police said. The force has released a statement saying the public was not thought to be at risk.

Fire and emergency services are always on high alert at this time of year with the number of fireworks on sale, but they quickly confirmed an electrical fault, to calm the general public and surrounding businesses.

Shoppers and workers who were about to make their way home have been sharing images of the scene, where tram travel has been disrupted.

West Midlands Fire Service said it was liaising with power suppliers to isolate the problem electrics.

The fire service said it would tackle the blaze from within a service hatch, once Western Power Distribution had been able to isolate the electrics.