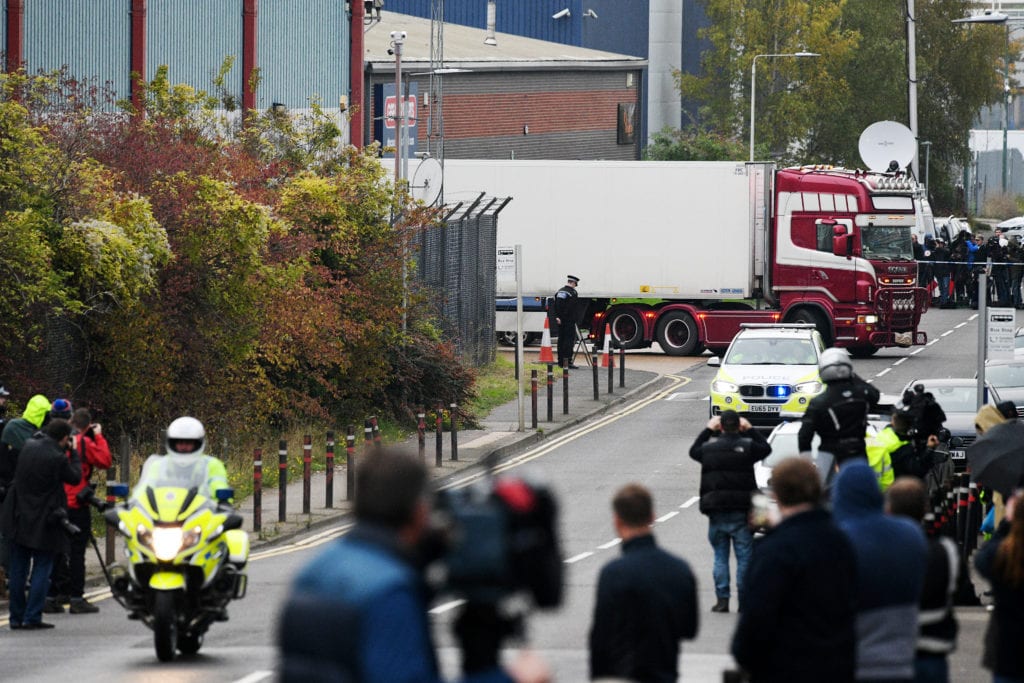 Two people have been arrested on suspicion of the manslaughter of 39 people found dead in a refrigerated lorry in Essex. As the investigation intensifies over the London Lorry driver deaths.

The man and woman, both 38, from Warrington, Cheshire, were also held on suspicion of conspiracy to traffic.

Detectives are still questioning the lorry driver on suspicion of murder.

Police have been given extra time to question driver Mo Robinson, of County Armagh in Northern Ireland, who was arrested on Wednesday.

The 39 people found dead in a refrigerated trailer in Essex were Chinese nationals.

Police have been given an extra 24 hours to question lorry driver Mo Robinson, 25, on suspicion of murdering the eight women and 31 men.

Three properties in Northern Ireland have been raided and the National Crime Agency is working to see if “organised crime groups” were involved.

The trailer arrived in Purfleet on the River Thames from Zeebrugge in Belgium.

Ambulance staff saw the bodies in the container at Waterglade Industrial Park in Grays just after 01:30 BST on Wednesday.

The lorry and trailer left the port at Purfleet shortly after 01:05.

Police said the tractor unit – the front part of the lorry – entered the country via Holyhead in Wales on Sunday, having arrived from Dublin.

Speaking after a magistrate granted Essex Police more time to question Mr Robinson on Thursday, Deputy Chief Constable Pippa Mills said her priority was “preserving the dignity of the 39 people who have died and ensuring that we get answers for their loved ones”.

Councillor Paul Berry said the village of Laurelvale in County Armagh, where the Robinson family live, was in “complete shock”.

The lorry has been moved to a secure site at Tilbury Docks and police said they were beginning the process of moving the bodies to a mortuary at Broomfield Hospital in Chelmsford.

They will be taken by private ambulance under police escort so that post-mortem examinations can take place, with the force expecting all the bodies to have been moved by the weekend.

Essex Police said it was the largest murder investigation in the force’s history and the victims were all “believed to be Chinese nationals”.

It said formal identification of the 39 people, one of whom is a young adult woman, “could be a lengthy process”.

China’s ambassador to the UK Liu Xiaoming tweeted that the embassy had read the reports of the deaths “with heavy hearts” and was in close contact with British police.

“We don’t have the facility to check the vast majority of freight which arrives in the UK, whether it moves or not,” she said.

She said disconnected freight containers were less likely to be searched unless there was “intelligence to the contrary that suggests we need to do that”.

Police initially suggested the lorry could be from Bulgaria, but later said officers believed it arrived from Belgium.

A spokesman for the Bulgarian foreign affairs ministry said the truck was registered in the country under the name of a company owned by an Irish citizen.

It was not clear when the victims were placed in the container or if this happened in Belgium, a spokesman said.