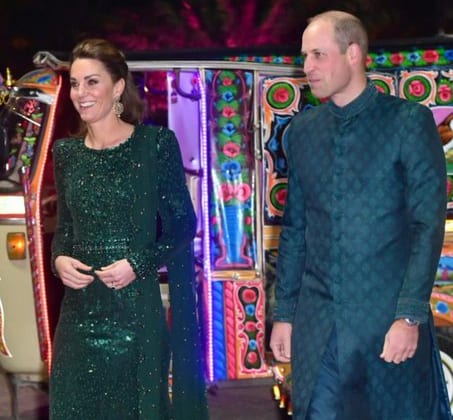 The couple have a meeting with Prime Minister Imran Khan

The Royal couple, the Duchess of Cambridge in a sea-green shalwar kameez, and the Duke in a dark suit, were greeted by Foreign Minister Shah Mehmood Qureshi and presented with flowers after they landed in a British government plane at a military base in Rawalpindi and top government officials cordially received them at the red carpet at the garrison city adjacent to the capital Islamabad.

The trip will be the first of its kind undertaken by any member of the British royal family to Pakistan in 13 years.

Details of the five-day visit are being kept under wraps. Security is expected to be tight for the couple’s first official trip to Pakistan, and the first visit by a British royal since William’s father Charles and his wife Camilla came in 2006.

In addition to Islamabad, they are set to visit the ancient Mughal capital of Lahore, as well as the mountainous north and the region near the border with Afghanistan in the west.

Kensington Palace has called the trip “the most complex tour undertaken by The Duke and Duchess to date, given the logistical and security considerations.”

The couple have a meeting with Prime Minister Imran Khan, who was close friends with William’s mother, the late Princess Diana.