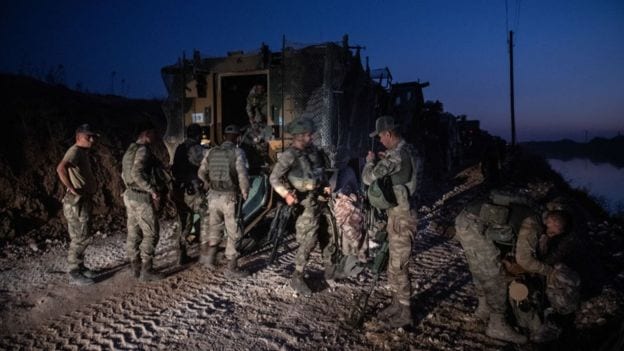 Smoke from destroyed targets rises in the city – for some Syrians all they have seen is war!

Yesterday in the cover of night the Turkish operation dubbed”Operation peace springs” against Kurdish militants in northern Syria began.

He said the offensive targeted Kurdish militants and the Daesh group in northern Syria.

It began with the launch of some precisely targeted airstrikes and then later the same evening the land army moved into place.

Turkish army howitzers are positioned on the Turkish-Syrian border, near the southeastern town of Akcakale in Sanliurfa province, Turkey, in place in case Daesh or it’s allied launches an offensive in Turkey.

A Turkish military convoy is pictured in Kilis near the Turkish-Syrian border, as Ankara launches Operation Peace Spring in northern Syria on Wednesday 9th October 2019

The Turkish army has hit a total of 181 militant targets with airstrikes and howitzers since the start of the operation, the Turkish defence ministry said late on Wednesday night.

Although President Erdoğan dubbed the invasion “Operation Peace Spring.” Initial reports suggest it is anything but.

Panic swept across northern Syria as Turkey’s warplanes pounded Kurdish towns and artillery fired across the border, in order to “soften up” the terrain for a ground offensive. The S.D.F. posted videos on social media of the aftermath, showing fires, destruction, and bodies on the ground, but non of these have been verified.

Even as the night begins to fall you can see the destruction caused by the Turkish invasion. “Operation Peace Springs”

Smoke from destroyed targets rises in the city of Ras al-Ain in Syria after Turkish Airstrikes Operation Peace Springs.

Stay up to date with the latest developments from Syria by following us on social media.