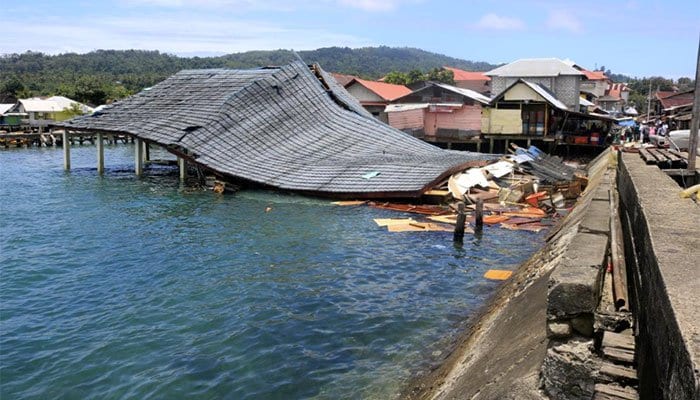 Indonesia’s history with earthquakes is devastating.

Four people have been confirmed dead after a strong earthquake struck Indonesia’s remote Maluku islands on Thursday. It has destroyed homes and triggered landslides that will cause more carnage and deaths, so far it has buried at least one of the four victims.

Terrified residents ran into the streets as buildings fell in around them after the 6.5-magnitude quake hit at around 8:45 local time (0045 GMT).

Two people were killed by falling debris, another died after being buried in a landslide while a woman was killed after falling off her motorbike while fleeing to higher ground. People in Ambon, a city of about 400,000 people, were seen helping injured residents in blood-stained clothes, while images showed wrecked homes with collapsed walls and rubble-strewn on the ground.

Some patients fled to a local hospital as the quake hit, prompting officials to set up makeshift shelters outside the building.

“The impact was felt across Ambon city and surrounding areas,” said Rahmat Triyono, head of the earthquake and tsunami division at Indonesia´s Meteorology, Climatology and Geophysics Agency (BMKG).

“Many people were woken up by the shaking…it felt like a truck was passing by.”

The US Geological Survey said the quake struck about 37 kilometres (23 miles) northeast of Ambon in Maluku province at a depth of 29 kilometres.

The area was hit by at least two dozen aftershocks including one that measured 5.6 magnitude, Triyono said.

Eyewitness accounts from Ambon described the scenes of panic and chaos as people fled their homes to reach safety on higher grounds.

Last year, a 7.5-magnitude quake and a subsequent tsunami in Palu on Sulawesi island left more than 4,300 people dead or missing.

The force of the impact saw entire neighbourhoods levelled by liquefaction — a process where the ground starts behaving like a liquid and swallows up the earth like quicksand.

Nearly 60,000 people are still living in makeshift accommodation nearly a year after the double disaster, the Red Cross said this week.

In 2004, a devastating 9.1-magnitude earthquake struck off the coast of Sumatra and triggered a tsunami that killed 220,000 throughout the region, including around 170,000 in Indonesia.

My Tweets
We use cookies to help identify your computer so we can tailor your user experience, track shopping basket contents and remember where you are in the order process. WTX News Our Cookie Policy
World News Briefing: Indonesia protests – Israeli PM to form next government & Australia decriminalises abortion
“The biggest humanitarian tragedy” as 15,000 have been lifted out of Kashmir
To Top
Weekly