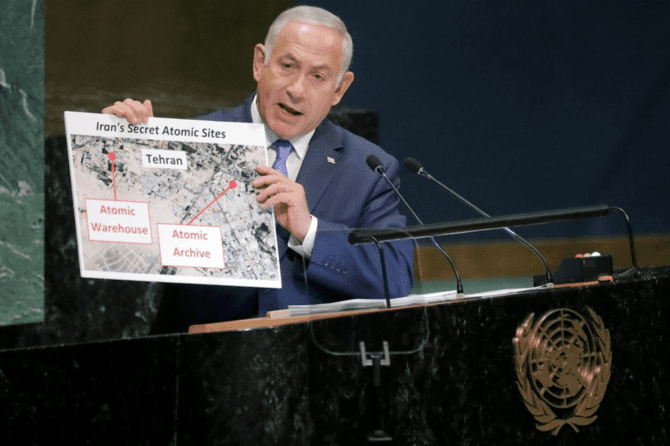 Israel’s prime minister stepped up his rhetoric towards Iran as he unveiled samples taken by the UN nuclear watchdog.

The Israeli prime minister claimed the “secret atomic warehouse” in Tehran showed traces of uranium that Iran has yet to explain, two diplomats who follow the agency’s inspections work closely say.

The International Atomic Energy Agency (IAEA) is investigating the particles’ origin and has asked Iran to explain the traces. But so far Iran has not responded, according to the diplomats, stoking tensions between Washington and Tehran.

It has to be clarified, that Iran has every right to respond to the claims made by the UN watchdog, following the report. However, the Isreali Prime Minister has continued to pile the pressure on the Iranians, who he perceives as a major threat in the middle east.

US sanctions have slashed Iranian oil sales, which the US and Iran have both walked away from. Iran has responded by making nuclear deals with world powers since Trump walked away from the negotiations.

The EU countries have urged the US to recognise the treaty signed in 2015 but Trump’s refusal has strained the relationship further.

In a speech a year ago Israeli Prime Minister Benjamin Netanyahu, who vehemently opposed the deal, called on the IAEA to visit the site immediately, saying it had housed 15 kg (33 lb) of unspecified radioactive material that had since been removed.

The deal imposed tight restrictions on Iran’s nuclear program in exchange for sanctions relief and was based on drawing a line under Iran’s past activities. Mainly the US and Isreali intelligence services believed Iran had a nuclear weapons program that it ended more than a decade before the deal.

Iran says its nuclear ambitions have always been peaceful.
This has always been contradicted by Netanyahu, who has repeatedly accused Iran of seeking Israel’s destruction, point to Tehran’s past to argue that it can never be trusted.