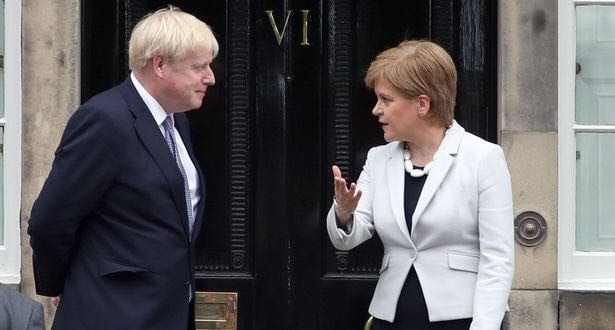 The Week So Far with Yvonne Ridley

When it comes to protests, rallies and marches in Britain we like to think that we are fulfilling our democratic right, but Brits barely register with the Establishment. By taking to the streets with our banners and placards to sabre rattle at the establishment.

The reality is the source of our aggravation – usually those in power in government – simply guffaw and carry on doing what they want in the knowledge that by the time night falls it will be over and we will have gone back home. And they’re pretty much right!

Perhaps we should follow the example of the largely peaceful Hong Kong protestors who’ve faced down tear gas, rubber bullets and water cannon as police try to disperse the tens of thousands who regularly march through the city defying a police ban.

While a few demonstrators on Friday night lit fires, threw petrol bombs at riot police and attacked the parliament building marking the five year anniversary since the Chinese Government blocked democratic elections in Hong Kong, most of those taking part did so peacefully despite police actions.

A few leading pro-democracy activists and lawmakers were arrested but I doubt this will stop the amazingly resilient protest movement which began against a controversial extradition bill. That bill has now been suspended and criminal suspects in Hong Kong will no longer face the threat of being despatched to mainland China for trial.

Even though the protestors were victorious they have kept up their rallies which have now widened out into a full-on pro-democracy movement in which police clashes have become more aggressive and violent. Despite the threat of being tear-gassed, hit by rubber bullets or drenched by water cannon they have continued ever more determined.

They made our most recent “Stop-the-Coup” protests look positively tame by comparison. Still, it really does take a lot to get Brits riled up enough to leave their homes and take to the streets and the cause this time was Prime Minister Boris Johnson’s decision to suspend Parliament in the run-up to Brexit.

Scores of cities across Scotland, Northern Ireland and England produced thousands of demonstrators. Central London was brought to a standstill but to be perfectly truthful an overturned applecart or a heavy goods lorry double-parked can do that in the congested English capital.

Johnson’s plan to prorogue Parliament which will see the so-called Mother of Democracies closed down for 23 working days just weeks before the Brexit deadline on October 31.

There was a sit-down protest in the roads around Trafalgar Square, before marching to Buckingham Palace shouting: “Whose democracy? Our democracy.” But again, it wasn’t anything like the sit-ins at Tahrir Square during the height of the Arab Spring in Egypt. People simply didn’t go home.

Brits barely register with the Establishment

Perhaps the most impressive action taken by anti-Brexiteers so far is a petition against the prime minister’s plan to suspend Parliament which has received more than a million signatures. Now imagine the chaos and impact if all three million signatories rallied in London and then refused to go home and held sit-ins in Trafalgar Square.

Imagine if the MPs who are furious at Johnson’s move hold a sit-in in the British Parliament and simply refuse to go home? But, when it comes to protesting, we seem to be far too polite and middle class in our behaviour.

Meanwhile, there was serious disruption during a Glasgow march on Friday night which had nothing to do with Brexit or Boris and everything to do with the ugly face of sectarianism in the city.

Riot police, helicopter units and dog units from Police Scotland were mobilised when an Irish Unity march in Govan was met by hundreds of thugs from counter-demonstrators. Police had to block roads to quell what they described as “significant” public disorder.

The Irish Unity march, led by the James Connolly Republican Flute Band, set off from Elder Park, Govan, at 18:30 but was ambushed by several hundred loyalist supporters. Ugly scenes followed.

Scotland’s First Minister Nicola Sturgeon blasted those promoting violence saying: “Peaceful protest is a part of our democracy – violent and sectarian disruption is not”.

Justice Secretary Humza Yousaf, whose Glasgow Pollok constituency was where the march started, described the scenes as “utterly depressing to see this divisive thuggery on our streets”.

Sectarianism in Scotland is a real issue to cause concern but with a little common sense applied, especially from those local authorities asked for permission to hold such marches, it needn’t be.

There are far more serious matters at play in Scotland especially for those of us (myself included) keen to see the country cut free from Westminster and become independent.

I thought the emergence of the #MeToo movement might be brought about the demise of some high profile sex pests and paedophiles but it seems we are still prepared to put up with the bad behaviour of some.

Of course, I’m referring to paedophile Roman Polanski, the very brilliant and talented film director who should have served time for his crimes.

Polanski is wanted in America after pleading guilty to unlawful sexual intercourse with a 13-year-old girl in Los Angeles in 1977 but then fled the country.

His latest film has just premiered at the Venice Film Festival. I suppose we should just be grateful he did not attend the screening of J’Accuse (An Officer and a Spy) starring the Oscar-winning actor Jean Dujardin.

The film is a historical thriller telling the true story of French Jewish army officer Alfred Dreyfus, who was falsely accused of treason in the 19th Century.

Dujardin plays a French officer who uncovers evidence that Dreyfus was framed, and who risks his life to expose the truth.

Polanski’s wife Emmanuelle Seigner, who stars in the film, told a press conference that her husband’s experiences had informed his film-making. “The feeling of persecution, I think is quite simple to understand. It is enough to see his life,” she said.

What a load of balderdash. Once again we have a situation where the predator portrays himself as the victim.

Alfred Dreyfus was an innocent man whereas Polanski admitted his crime before doing a runner for the US.

Regardless of what his defence is – or might be should he ever be brought to justice – for having sex with a 13-year-old, that is the age of a child and that makes him a paedophile in my view.

I am so sad to hear of the death of Formula 2 driver Anthoine Hubert who was killed in a 170mph crash at the Belgian Grand Prix.

Organisers of the motorsport say the Frenchman, only 22 years old, suffered a huge impact from a car driven by American Juan Manuel Correa at the Raidillon swerves.

Hubert was taken to the medical centre after the incident but died at 6.35pm while Correa is said to be in a stable condition. The race was stopped after the crash and cancelled within minutes as the scale of the crash became clear.

Hubert, who drove for the BWT Arden team had scored two wins this season, in Monaco and France, and was lying eighth in the championship.

F1 Driver Lewis Hamilton wrote on Instagram: “This is devastating. God rest your soul Anthoine. My prayers and thoughts are with you and your family today.

“If a single one of you watching and enjoying this sport think for a second what we do is safe, you’re hugely mistaken. All these drivers put their life on the line when they hit the track and people need to appreciate that in a serious way because it is not appreciated enough.

“Not from the fans nor some of the people actually working in the sport. Anthoine is a hero as far as I’m concerned, for taking the risk he did to chase his dreams. I’m so sad that this has happened. Let’s left him up and remember him. Rest in peace brother.”

Oh no, it’s that time of year again when the glitter ball is brought out and dusted down for another dose of the BBC’s show Strictly Come Dancing.

And you know what? I’ll be sitting there an infant of the TV with my popcorn cheering them on!!