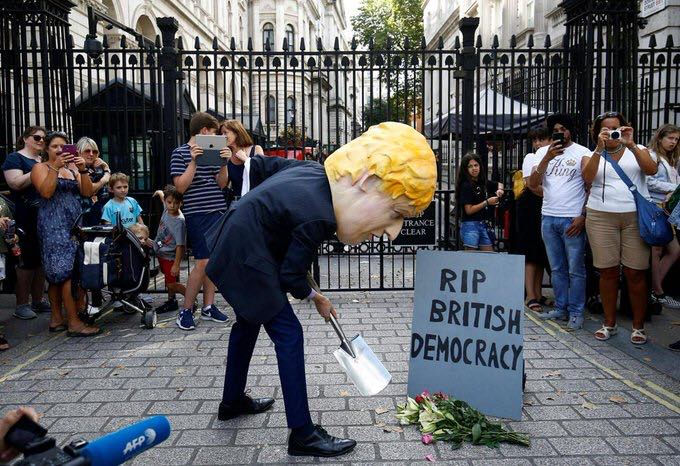 The shutdown of Parliament is also being challenged in three separate court cases scheduled to be heard this week.

Crowds gathered in London over the weekend and in other major British cities to protest the Prime Minister Boris Johnson’s suspension of Parliament for part of the period before the Brexit deadline in two months.

Several thousand protesters gathered near Johnson’s residence at 10 Downing Street in central London, while others protested in Belfast, York and other cities to show determination to block a “no deal” Brexit.

The crowds were galvanized by Johnson’s decision to shut Parliament for several weeks when a debate about Brexit plans had been expected.

In London, they chanted: “Boris Johnson, shame on you.” Some carried signs saying: “Stop the Coup” in reference to what they say is a move that threatens democracy.

The protests have been organized by the anti-Brexit group Another Europe Is Possible and by Momentum, which is allied with the opposition Labour Party. The group is urging its membership to “occupy bridges and blockade roads.”

Organisers say protests are planned in more than 30 locations throughout England, Scotland, Wales and Northern Ireland.

Johnson’s plan is also being opposed by some in Parliament who plan to introduce legislation this week to try to prevent a disorderly departure from the European Union.

Their task will be made more difficult if Johnson’s plan to shut Parliament for part of the time period before the Oct. 31 Brexit deadline is carried out. Johnson’s supporters may well be able to delay any proposed legislation from being enacted in time.

The shutdown of Parliament is also being challenged in three separate court cases scheduled to be heard this week.

Tory party spokespeople played down the number of protestors suggesting it didn’t even make thousands, however, WTX News reporting and other major news outlets witnessed the several thousand people protesting in London alone.

Tories to call an election

Boris Johnson is considering seeking an early general election if MPs wanting to block a no-deal Brexit defeat the government this week.

Tory ex-ministers are joining forces with Labour to stop the UK leaving the EU on 31 October without a deal.

Tory rebels – who include former ministers and prominent backbenchers – have been warned that those who support the legislation face being expelled from the party and deselected.

But leading figures, including ex-Justice Secretary David Gauke, have insisted that despite the threat, they will press ahead and – in their words – put the “national interest” ahead of their own.

Amid mounting speculation about an election, Mr Johnson is due to hold an unscheduled cabinet meeting at 17.00 BST and will also speak to the wider Conservative parliamentary party later.

The prime minister, who helped lead the successful Brexit referendum campaign, says his government is actively pursuing a new deal with EU leaders and claims opposition to his policy will make it harder to wring concessions from Europe.