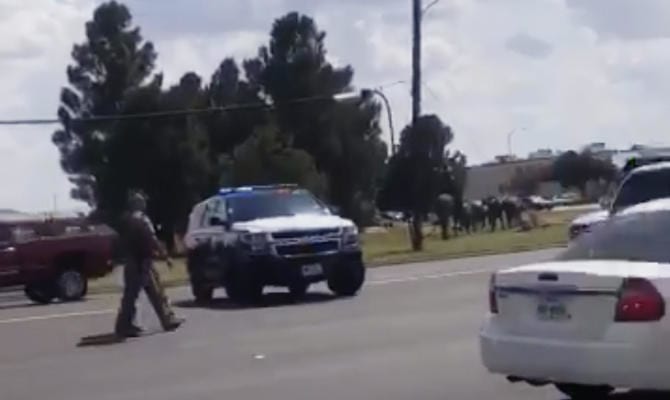 Five people have been killed, including a shooter, and around 21 were injured in a gun rampage in the cities of Midland and Odessa in West Texas on Saturday.

A witness in Odessa, Texas, captured what appears to be a gunman shooting outside of a theatre as police arrived on the scene.

A shooter targeted shoppers and vehicles at shopping centres in the areas of Odessa and Midland, Texas.

A suspect was shot and killed in Odessa, according to a Facebook post by the Midland Police Department.

BREAKING NEWS: Mass shooting in Odessa, Texas. 5 dead, 21 injured. The shooter was driving around shopping centers and fired at random people. The suspect, white male in his mid-30s shot and killed by police. #TexasShooting pic.twitter.com/rd3mZVqnwQ

Midland Mayor Jerry Morales told CNN the shooter was shot and killed in the parking lot of a movie theatre: “We’re hoping it’s just one shooter and we have contained him.”

Morales said he did not know anything about the suspect or what his motive was. He said one police officer was shot and was in surgery with non-life-threatening injuries.

The television station reported that armed police ran through the Music City Mall in Odessa where CBS7 is located and the building went on lockdown.

The shooting came after 22 people were killed at a Walmart store about 255 miles west of Midland in the city of El Paso, Texas on Aug. 2.