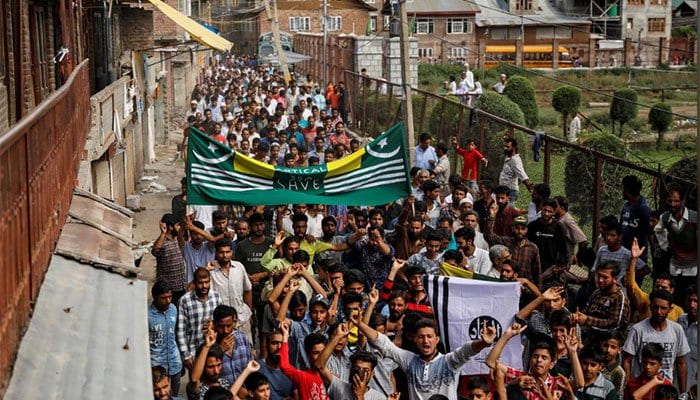 Thousands arrested in Kashmir and flow out for detention

Thousands of people have been arrested by Indian authorities in occupied Kashmir as curfew and other restrictions continued for the third week, following the Indian government’s abolition of the special status of Kashmir.

At least 6,000 people have been arrested under the black Public Safety Act (PSA) over the past two weeks, a magistrate told AFP in Srinagar.

“Most of them were flown out of Kashmir because prisons here have run out of capacity,” the magistrate said, adding that he was using a satellite phone to communicate with colleagues across the occupied territory amid a communications blackout imposed by authorities.

As a result of the strict curfew and communication blockade, a humanitarian crisis is fast unfolding as residents of the disputed territory of Kashmir face severe shortages of essential commodities including baby food and life-saving medicines.

An Indian government spokesman, Rohit Kansal, said previously there was “no centralised figure” for the total number of people detained, but a number of government officials in Srinagar, including police and other security personnel, confirmed the arrests.

A police official said on condition of anonymity, “Around 6,000 people were medically examined at a couple of places in Srinagar after they were detained. They are first sent to the central jail in Srinagar and later flown out of here in a military aircraft.”

Prime Minister Imran Khan on Sunday said India has been captured by a fascist and racist Hindu supremacist ideology and leadership just like how the Nazis had captured Germany.

The prime minister in a series of tweets said, “India has been captured, as Germany had been captured by Nazis, by a fascist, racist Hindu Supremacist ideology and leadership. This threatens 9 million Kashmiris under siege in IoK for over 2 weeks which should have sent alarm bells ringing across the world with UN Observers being sent there.”

PM Imran further said the threat also extends to Pakistan, the minorities in India and in fact the very fabric of Nehru and Gandhi’s India. “One can simply Google to understand the link between the Nazi ideology and ethnic cleansing and genocide ideology of the RSS-BJP Founding Fathers.”