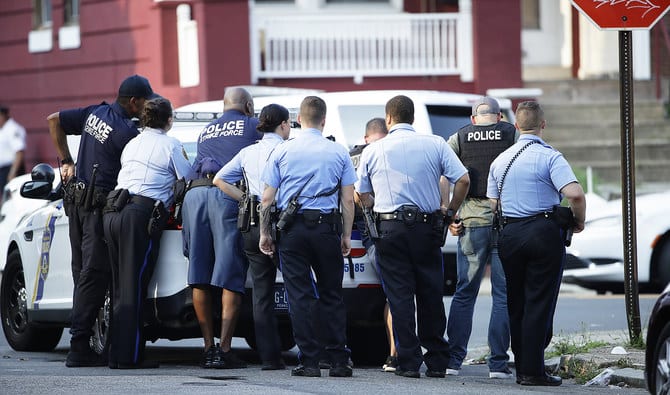 Another gun shooting in the US as the suspect has been taken into custody after injuring six officers in a shootout in the US city of Philadelphia.

A gun battle broke out between police and a male shooter at about 16:30 local time (20:30 GMT). He held off a SWAT team for hours and the lone gunman stood his ground and picked the police off, with relative ease.

The officers were serving a drugs warrant at a home in Philadelphia’s Nicetown-Tiago neighbourhood when the gunman opened fire.

Soon after the melee began, more than 30 police vehicles swarmed the intersection of North Broad Street and West Erie Avenue, a semi-residential area, with homes and apartment buildings alongside temples and coffee shops.

A seven-hour stand-off ensued as police urged the gunman to surrender. Six officers who sustained non-life threatening injuries in the shooting have been released from the hospital.

The suspect has been named by US media as 36-year-old Maurice Hill, leaving the house with his hands in the air.

Philadelphia Police Commissioner Richard Ross says that SWAT managed to free the two police officers and three others who were trapped inside the row house with the shooter.

“It’s just something that, we need to do something about it,” Kenney said at a second press conference Wednesday evening. “And if the state and federal government don’t want to stand up to the NRA and some other folks, then let us police ourselves. But they preempt us on all kinds of gun control legislation.”

Dramatic live footage from media helicopters showed scores of officers swarming the house in the residential Nicetown — Tioga neighbourhood. They crouched behind cars and exchanged fire with someone inside the house. At one point officers were escaping the building through windows and gunman was firing through walls.

Since surrendering the gunman has been taken into custody and the recovering Police officers injured have been released from the hospital.