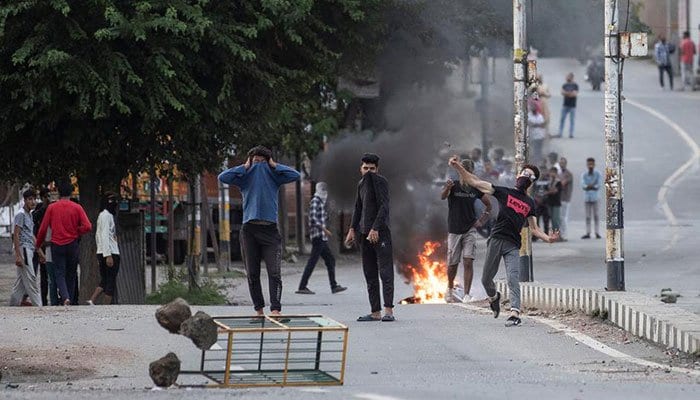 What Kind of Eid is this?

Indian-occupied Kashmir has been in a security lockdown since last Monday, over 600 people have been arrested in a sweeping move when India’s Hindu-majority government rescinded years of autonomy and gave full control to New Delhi.

India is using this opportunity to create unrest and strengthen their grip over the Kashmiri’s using the blueprint of Isreal’s occupation of Palestine as a roadmap.

The majority Muslim region is looking to celebrate Eid-ul-Adha today, but have been starved of resources. living under a curfew unable to shop or prepare for one of the most significant celebrations in the Muslim calendar.

Residents in Indian-occupied Kashmir, meanwhile, said they were struggling to prepare for Eid because of the security crackdown.

A local resident, a 45-year-old mother who was in tears, claimed how she had to tell her daughter that she wouldn’t be able to buy her new clothes or go out to play this year. And her daughter’s response broke her heart as the 4-year-old replied, ‘What kind of Eid is this?’

The Indian government did not make a mistake with the timing, they are accustomed to the Muslim lifestyle and have been aware of the upcoming celebration. However, according to a political strategist, they are using this opportunity to force the insurgents to cause civil unrest, which will give the authorities cause to arrest and make legal detentions.

If they are able to imprison the leaders of protests, they can then take control more swiftly and with less disruption.

Officials in India attempted to ease the restrictions earlier Sunday but imposed them again in the afternoon amid a tense atmosphere in the main city of Srinagar.

They plan to keep security tight on Monday to block any big gatherings of people during Eid-ul-Azha, a police official said.

According to Kashmir Media Service, scores of people were injured after the occupying forces and police used brute force against the protesters in Srinagar.

Defying stringent curfew, thousands of people including women, children and elderly persons gathered in Soura area of Srinagar after the Friday prayers and protested against New Delhi’s action of abrogating special status of the occupied valley.

This followed worldwide condemnation for the actions of the BJP in India which Imran khan has labelled as ‘nazi style rule’.

The premier tweeted that the “ideology of Hindu Supremacy, like the Nazi Aryan Supremacy, will not stop” in Kashmir.

Describing the move as “the Hindu Supremacists version of Hitler´s Lebensraum”, he said it would lead to “the suppression of Muslims in India & eventually lead to targeting of Pakistan”.

Under its previous constitutional autonomy, Kashmiris enjoyed special privileges such as the sole right to own land or take government jobs and university scholarships.