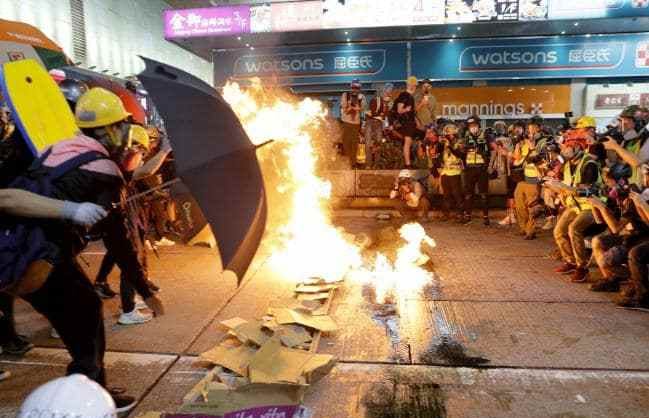 More than 100 flights cancelled as Hong Kong goes on strike

The Hong Kong protests run into the 5th straight day

Another huge day of protests has embroiled Hong Kong authorities into a situation they haven’t experienced before that they are likely to hit the Asian financial hub today.

As a result, more than 100 flights have been cancelled and travel chaos as Beijing tries to come to grips with the ‘Hong Kong’s defiance’.

The airport is packed with people whose flights have been delayed or cancelled.

This is Hong Kong’s ninth consecutive week of protests. Which started in early June over a now-suspended extradition bill, but demands have evolved to include greater democracy and police accountability

People are striking and protesting across seven districts of Hong Kong in the most ambitious and wide-ranging day of demonstrations this summer.

Strikes across all sectors

The problems and revolt that Beijing faces are not just with a certain group of protestors, they are diverse. With strikers including teachers, aviation workers, finance employees and civil servants.

All the major sectors will be hit, with people not showing up to work and as a result, one of the most powerful cities in the world, the Asian financial hub, is likely to screech to a halt today.

Protesters form a barrier in a standoff against the police, as they confront with police in Hong Kong

These protestors include the financial workers, on Thursday, Thousands of financial workers peacefully gathered in Hong Kong’s central business district at night in support of the protest movement.

In the past few weeks, Beijing has toyed with the idea that these protests must have the support of the British and that they have been stooking the fire.

In one instance an analyst from Beijing speculated that the influence of the British cannot be ignored, with so much institutional power still loyal to British imperial rule, it was an almost certainty that the former British colony had been nurtured to this point.

Hong Kong enjoys certain freedoms, including freedoms of expression, assembly, and press, she said — but added that the current crisis is no longer about “individual aspirations or about the bill.”

“I’m sure individual sectors who still have a stake in this society would like us to defend,” Lam said, again calling for people to “rally together” and restore order in the city.

A summer of discontent has hit the Hong Kong economy. Sops and retailers have been hurt by the ongoing protests, And according to financial secretary Paul Chan the downward spiral will continue into the next quarter unless services can be fully restored.

The Hong Kong government has warned protesters could push the city into a “very dangerous situation” after another weekend of demonstrations paralyzed traffic and transformed an iconic shopping district into a battleground.

More than 100 flights cancelled as Hong Kong goes on strike