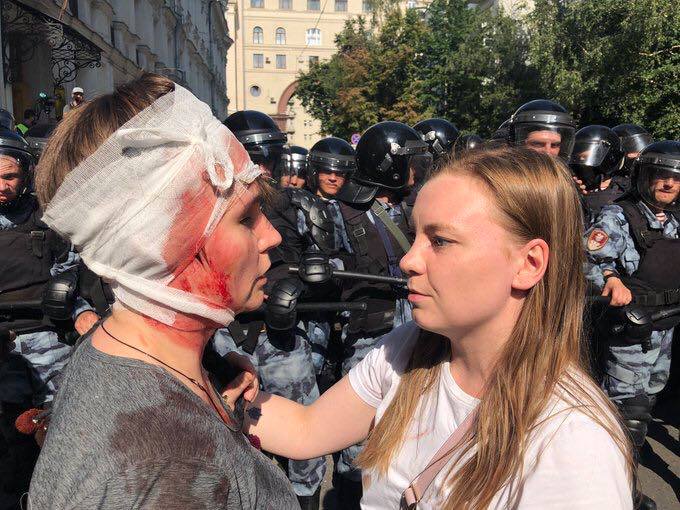 In The weekend briefing, we start with the tragic Texas shooting in America and in Breaking News; there’s been another shooting in the USA in Ohio, with 9 people killed! Moving onto the UK PM Johnson’s senior aide warns its ‘too late’ to stop a no-deal Brexit.

Over in Moscow, 600 protesters have been detained following a demonstration for a fair election. Police face backlash for violence.

Finally, we get an update on the latest news about the Derbyshire dam as more residents are evacuated.

All in today’s SUNDAY PAPERS briefing – A roundup of all the news headlines that you need to know, summarised as part of WTX News Briefing.

‘TOO LATE’ TO STOP NO DEAL BREXIT

The Sunday Telegraph leads with the news MP’s have been told it’s “too late” to stop a no-deal Brexit. Johnson’s senior aide, Dominic Cummings told MP’s Labour missed the chance to force a general election before the deadline.

The Observer suggests, leaving without a deal could cause “chaos” in schools around the country. The government fears some schools could close, free food will run out and exams could be disrupted. The government’s fears are set out in a secret report by the Department of Education.

Read the full story on The Observer

The Telegraph reports, 600 protesters have been arrested in Moscow after demonstrators took to the streets calling for a fair election in the Capital next month. The protesters are calling for officials to let popular opposition

candidates be able to run in the September parliament elections.

BBC News adds the hundreds detained by police were apart of an “unauthorised demonstration.”  The illegal protest was described by the organisers as a “stroll” making it difficult to determine who was actually apart of the protest. BBC News highlights the reported police violence shown during the rally and said the riot police were out in huge numbers and had erected metal barriers and blocked off roads.

DW says more people have been evacuated from the town of Whaley Bridge as heavy rain and lightning is expected on Sunday. In a race against the weather, residents were given just minutes to collect their essential belongings before police evacuated them out of their homes.

Read the full story on DW

The Sun says during a visit to the Derbyshire Town, PM Boris Johnson said he had flown over the dam twice and described the dam as “dodgy but stable.” The PM vowed to re-house the evacuated residents if the dam bursts. Local police have warned the dam is still at a “critical level” and there is a “substantial threat to life” if the dam collapses.

A mostly dry and fine day, but rather cloudy throughout the afternoon. A few bright spells will break through at times. Feeling very warm. Just the outside chance of the odd afternoon shower.

Cloudy night with a risk of rain increasing after midnight. Any rain that moves in is expected to be light and patchy, with some places escaping and staying dry.

1. Why does Jared Kushner still have a security clearance?

2. Why is @realDonaldTrump suing to eliminate health care coverage for Americans with pre-existing conditions?#SundayMorning Thoughts https://t.co/SE8dfGkFzR

“Toto, I’ve got a feeling we’re not in Kansas anymore.”

A bit of Nostalgia from our entertainment people28

INSIDE THE TEXAS SHOOTING

In today’s featured special we look into the mass shooting in Texas. We find out about the suspected shooter’s manifesto, inspiration and why some are calling him a ” lost young man.”

Al Jazeera News reports, An armed man opened fire in a packed shopping mall in El Paso, Texas. The attack killed 20 people and injured 26. The man, 21 was arrested outside a Walmart near the US- Mexico border. Us Media named the suspect as Patrick Crusius, a white male from Texas. Police confirmed they are in possession of the suspect’s “manifesto” which detailed the “Hispanic invasion” of Texas and noted he had expected to be killed in the attack.

The New York Times says minutes before the attack the suspects “hate-filled Manifesto” appeared online. In the manifesto titled “The Inconvenient Truth”, the suspect details his plans to separate America into race territories and warned white people were being replaced by foreigners. Inspired by Trump the 2000 word manifesto described of an imminent attack and raged against immigrants. It drew inspiration from the New Zealand mass murder of Muslims in March and claimed immigrants were taking jobs from “natives.” The manifesto highlights the shooter’s support for President Trump and adds his opinions on immigration predate Trump’s campaign for President.

The New York Times describes the suspected shooter as “a lost young man” and noted shortly after the mass shooting his social media accounts were shut down.

France 24 adds the police are treating the incident as a HATE CRIME and Texas Governor, Gregg Abbott has said the shooting will be aggressively prosecuted as capital murder and a hate crime. El Paso police chief described the scene as “horrific” and added those who were hurt in the attack face “life-threatening injuries.”

One witness claimed four men, dressed in black came shooting in the mall. Police believe the shooter to only be one individual but are continuing to investigate others were involved.

A temporary export bar has been placed on a £10m painting by one of the UK’s most celebrated artists, JMW Turner.

Get swept up in Beatlemania as fans from all over the world descend on the city where it all started.

At the Cavern Club in Liverpool, free of charge.