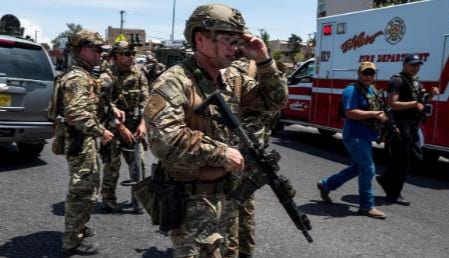 Breaking News from Texas: A fatal shooting at a Texas shopping mall has ended in multiple deaths, confirmed by local officials.

Police warned residents to steer clear of the Cielo Vista Mall in El Paso, just a few miles from the US-Mexico border.

A police spokesman on the scene confirmed there had been deaths but an exact toll is unclear.

One person has been taken into custody. But it is unclear if he the lone shooter.

The video is very graphic so please watch with caution.

Very Graphic shooting outside Walmart in Elpaso Texas. May god rest their Souls and our prayers to their Familes #elpasoshooting #elpaso #breakingNews pic.twitter.com/vTAB5sJwSp

Police made three arrests in total, but two people have been freed.

A second mall about 2.5 miles away from Cielo Vista is also on lockdown, according to an employee at a liquor store attached to the mall.

This is a live crime scene and more information will appear as it breaks.