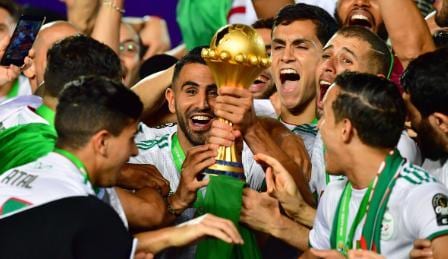 Baghdad Bounedjah’s early goal propelled Algeria to a first Africa Cup of Nations title in 29 years after a fiery 1-0 victory over Sadio Mane’s Senegal in Friday’s final in Cairo.

For Senegal, who lost to Algeria by the same scoreline in the group stage, the long wait for a first continental crown goes on as coach Aliou Cisse, the captain of the 2002 runners-up, again fell short in the final.

It was the first title-decider to feature two African coaches since 1998, with Algeria boss Djamel Belmadi completing a whirlwind 12 months at the helm after inheriting a side that failed to make it out of the group stage two years ago.

With defensive rock Kalidou Koulibaly suspended for Senegal, Salif Sane deputised at the back and Ismaila Sarr was recalled in the attack, while Belmadi kept faith in the same side that overcame Nigeria with an injury-time free-kick from Riyad Mahrez.

Senegal had understandably feared the absence of Napoli star Koulibaly, banned after two bookings in the knockout rounds, although the towering Sane was desperately unlucky as Algeria grabbed the lead with scarcely a minute played.

Senegal thought they had won a penalty on the hour when Cameroonian referee Alioum Alioum pointed to the spot for a suspected handball by Adlene Guedioura, but the official reversed his decision after a VAR review.

Celebrations have gone crazy around the globe as Algerians are lost in celebrations.

Yvonne Ridley is at Scotland.

Missing in action! My #Algerian hubby may be out celebrating for some time this evening, I reckon. #africacupofnations

Not everyone was happy, especially Tommy Robinson supporter Stephan.

The "football fans" were seen climbing on top of war memorials, cars, fountains and one police vehicle was smashed up.

Despite the chaos, NO arrests were made pic.twitter.com/I2mVffKxsz

But everyone else enjoyed the evening, even in France.