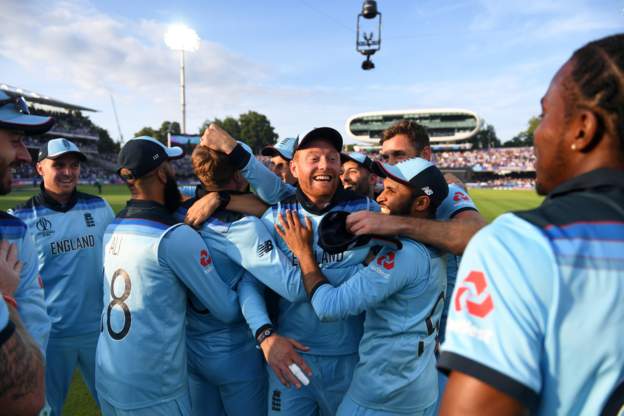 England Champions of the World – CWC19 Champions at the home of cricket Lords.

England won the World Cup for the first time ever on Sunday, holding their nerve to seal a thrilling Super Over victory against New Zealand after the final ended in a tie.

A World Cup Cricket final that might just be the greatest game of cricket in history. The Drama was sensational, the tension was nailbiting. You couldn’t watch and you couldn’t look away. You hated it and you loved it and you lost yourself completely to it.

No-one had ever seen Lord’s like this, a beautiful sedate museum turned into a playground game executed with some unbelievable skill. No-one had really seen cricket like this.

Needing 15 off the last over to win, Stokes was unable to score off the first two balls but lofted the third for six over long-on.

England got the target down to two from one ball but they could only manage a single, with last man Mark Wood run out, before the drama of the Super Over.

Eoin Morgan’s side finished on 241 all out in pursuit of New Zealand’s 241-8, sending the match at Lord’s to a six-ball shootout for each side.

In the super over England’s Ben Stokes and Jos Buttler took 15 off Trent Boult’s over before Jofra Archer stepped up to bowl against Martin Guptill and Jimmy Neesham.

With two runs required off the final ball, wicketkeeper Jos Buttler and Jason Roy combined to run out Guptill as he desperately came back for the second.

However, this game was a fairytale, it was just meant to be. the fluke six which brought England within a chance and a steller man-of-the-match performance by Ben Stokes. This game was redemption for Stokes, taunted by the media for his New Zealand heritage, following a 2017 street brawl, which threatened to ruin his career and he wept openly during the jubilant on-field celebrations.

England are champions of the world! but let’s not forget the Kiwi’s who played an excellent game of cricket and are an amazingly talented team, led by the brilliant Kane Williamson who deservedly received the player of the tournament award. made history by being part of one the most spectacular games of cricket the world has ever seen.

But it was wonderful for England, four years on from their humiliation in Adelaide at the last World Cup, and it was redemption for all those who have followed them and hoped and suffered along the way.