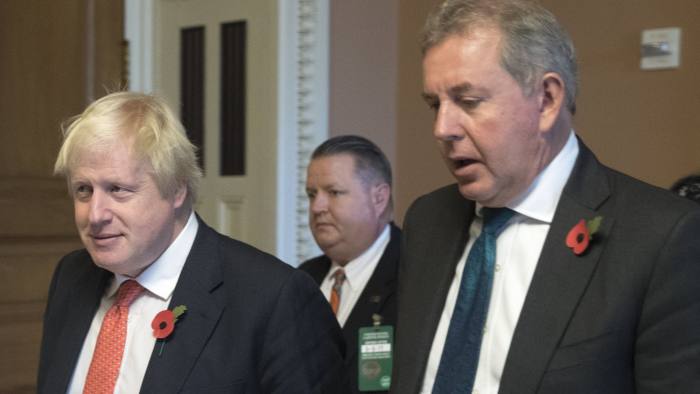 Access is the key for every single diplomat serving around the world today and without it, ambassadors especially, can not do their job.

That is why Sir Kim Darroch resigned his post as ambassador to the US but his departure also exposes how weak Britain has become.

The UK is increasingly isolated in Europe because of Brexit and while its so-called ‘special relationship’ with America has never been equal it is probably the weakest it has ever been since being labelled the US poodle over the invasion of Iraq.

US President Donald Trump is a bully; that’s how he conducts business but his thin skin also makes him unpredictable, prone to lashing out to those who would criticise him.

So it was hardly surprising that Trump reacted in a hostile way when it emerged Sir Kim had sent private communications saying: “We don’t really believe this administration is going to become substantially more normal; less dysfunctional; less unpredictable; less faction-riven; less diplomatically clumsy and inept.”

Dating from 2017, Sir Kim’s emails also revealed well-known rumours of “infighting and chaos” in the White House were largely true.

The highly respected ambassador probably thought he could ride out the controversy until Boris Johnson appeared less than willing to support him during the Tory leadership debate on television on Tuesday night with his rival Jeremy Hunt.

Europe Minister Sir Alan Duncan accused Johnson of throwing “our top diplomat under a bus” adding it was “contemptible negligence” not to support Sir Kim.

His views were echoed in a tweet from Tory MP and chairman of the Commons’ foreign affairs committee Tom Tugendhat who bluntly stated: “Leaders stand up for their men. They encourage them to try and defend them when they fail.”

Meanwhile, the Commons’ foreign affairs committee was told Sir Kim’s departure was the first time in living memory that a head of state had refused to work with a British ambassador.

Britain now finds itself in unchartered waters. Questions are already being asked who will be Sir Kim’s replacement and how will the man or woman for the top post be appointed – from the ranks of the civil service or more of a political figure?

There’s also a dilemma of who will choose the next ambassador between the outgoing British Prime Minister Theresa May or her replacement who is almost certainly going to be Johnson.

There are two massive causes for concern among British civil servants, their diplomats and politicians over the whole affair. One is Trump’s own assessment of Sir Kim’s departure including real fears that the US President may now think he has the power and influence to be involved in picking and choosing Britain’s next ambassador to Washington.

The second is the person(s) behind the leak. It’s no use attacking political journalist Isabel Oakeshott for her stunning exclusive story but the originator of the leak and their motives do need to be exposed.

The government has opened an internal inquiry while police have been urged to launch a criminal investigation to find the culprit.