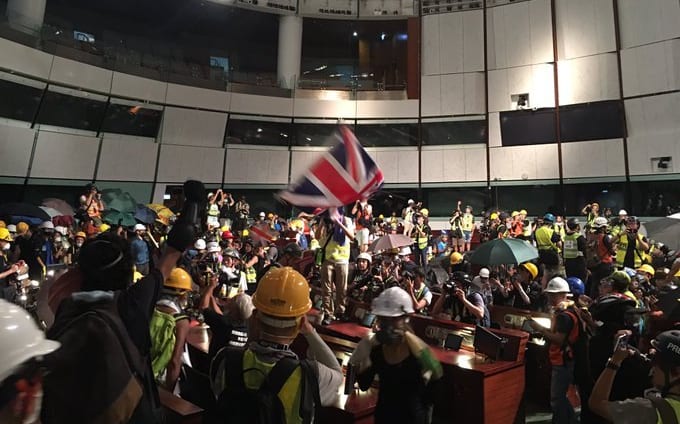 In recent weeks, millions of people have protested the controversial extradition bill

The annual flag-raising ceremony held on Monday, marking the 22nd anniversary of Hong Kong’s shift from British to Chinese rule, was met with a clash between police and demonstrators.

In recent weeks, millions of people have protested the controversial extradition bill, which would allow people to be sent to mainland China for trial.

Whilst the Government has agreed to suspend it indefinitely, rallies and protests have continued and a growing crowd calling for Ms Lam’s resignation.

The protesters are calling for a complete withdrawal of the extradition bill, no longer using the term “riot” to describe protests on 12 June, releasing detained activists and investigations into police brutality.

In a police statement, protesters were condemned for there “illegal acts” following Monday’s demonstrations.  After blocking off roads and stocking up on iron poles and guard rails from a nearby construction site protestors were warned to not throw bricks or charge the police line.

An “unknown liquid” used by the protesters forced 13 police officers to be taken to the hospital after experiencing breathing difficulties.

Hong Kong, a part of China since 1997, operates a “one country, two systems” principle. The extradition bill raised serious concerns about judicial independence with some believing it would bring Hong Kong further under China’s control.

June 12 saw the worst violence in decades for the city, with police using tear gas and rubber bullets to disperse the protesters.

Demonstrations eventually led to the government apologies and suspending the planned extradition law.