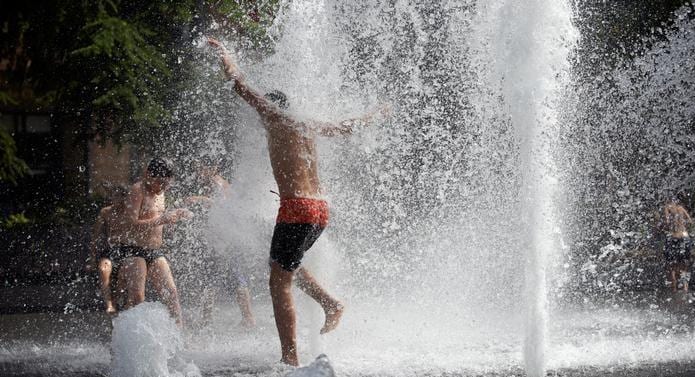 France Met office warns that the current record could still be topped in the current heatwave.

What a glorious end to the week we have had right across Europe, thanks to the hot air current from Africa.

France has recorded its all-time hottest temperature amid a European heatwave that has prompted governments to issue health alerts, urging people to keep cool.

The temperature rose to over 44.3 C in France, making it the hottest temperature logged since records began. Meanwhile, a wildfire in Spain has destroyed thousands of hectares of land.

Climate change could explain the high temperatures striking through Europe unusually early this year. Several people have lost their lives amid soaring temperatures. The heatwave has also caused flash floods and forest fires, grounded planes and buckled train tracks, and led to school closures and warnings over air quality.

As the mercury continues to rise, Meteo, French national meteorological service, in France warned that the current record could still be topped in the current heatwave.

Thousands of schools have closed across France, as they could not guarantee safe conditions for students.

In Germany, people are filling hot water bottles, placing them in freezers and then taking them to bed. France has set up temporary water fountains in built-up areas and is allowing public pools to open late into the night.

In Berlin, police have been taking out water cannons — which are typically used against rioters — and using them on trees in the German capital in an effort to cool them off.

Hundreds of firefighters are working to contain the blaze, which is believed to have been started in a pile of chicken dung. The fire in the Catalan province of Tarragona has also destroyed an estimated 6,500 hectares (16,061 acres) of forest so far.

At least 16 cities in Italy have also been put under alert, with civil security services reportedly distributing water to tourists visiting historical sites in Rome.

Forecasters say the heat will continue through the weekend and into early next week and have advised to keep sun cream and water bottles at hand throughout the heatwave.

Global warming is expected to increase the frequency and intensity of dangerous canicules in the future, warns Météo-France. Extreme heat has killed before in Europe, and in 2003 scarred the whole of France with the deaths of more than 14,000 mostly elderly people.