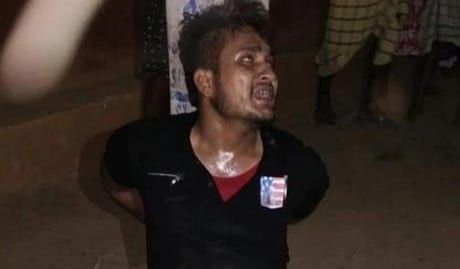 Indian police arrested 11 people Tuesday over the killing of a Muslim man who was tortured and forced to chant Hindu slogans in the latest mob violence to shock the nation.

Two police officers have also been suspended over the handling of the lynching of Tabrez Ansari, captured on a video that went viral on Indian social media.
The 24-year-old is seen in the video crying and pleading as a mob in Jharkhand state forces him to chant “Jai Sri Ram” — hail Lord Ram — a slogan widely used by Hindu hard-liners.

Ansari had been accused by villagers of carrying out a burglary. He was tied to a pole and beaten for up to 12 hours before police first detained him in Seraikela and then the police took him to a hospital where he died Saturday.

US pressure intensifies as Pompeo arrives

The clampdown follows a report by the U.S. State Department which examined attacks on minorities, specifically Muslims, during 2018.

The report found that “Mob attacks by violent extremist Hindu groups against minority communities, especially Muslims, continued throughout the year amid rumours that victims had traded or killed cows for beef”.

It also noted reports by non-governmental organisations that the government sometimes failed to act on mob attacks on religious minorities, marginalised communities, and critics of the government.

While in New Delhi, Pompeo is expected to hold talks aimed at laying the ground for a meeting between US President Donald Trump and Modi during a G20 summit in Japan later next week.

On Sunday India rejected a US State Department’s annual report on religious freedom that raised questions about the government’s inability to curb violent attacks on the country’s minority Muslims and Sikhs.

Preparing for a visit by US Secretary of State Mike Pompeo on Tuesday, India’s foreign ministry issued a stiff rejoinder to the US criticism.

“India is proud of its secular credentials, its status as the largest democracy and pluralistic society with a longstanding commitment to tolerance and inclusion,” Raveesh Kumar, the ministry’s spokesman, said in a statement.

Accusations against the Indian government have been consistently levied since the Gujrat attacks 10 years ago.

The violence has seen a steady increase leading up to the vociferous Indian election campaign and was fuelled by the tense standoff against Pakistan after the attacks in Pulwama in February of this year.

In the latest attack against Ansari, the Muslim, media reports said Ansari’s wife has accused police of deliberately being negligent and taking him to jail first instead of a hospital despite the critical injuries he suffered.

Opponents in India have also accused the government of not doing enough to stop lynchings.

The opposition Congress party accused Modi’s right-wing Bharatiya Janata Party (BJP) of failing to protect Muslims and other minorities. But the government denied the allegations suggesting it was a ploy to disrupt the inclusive society Modi has been developing.