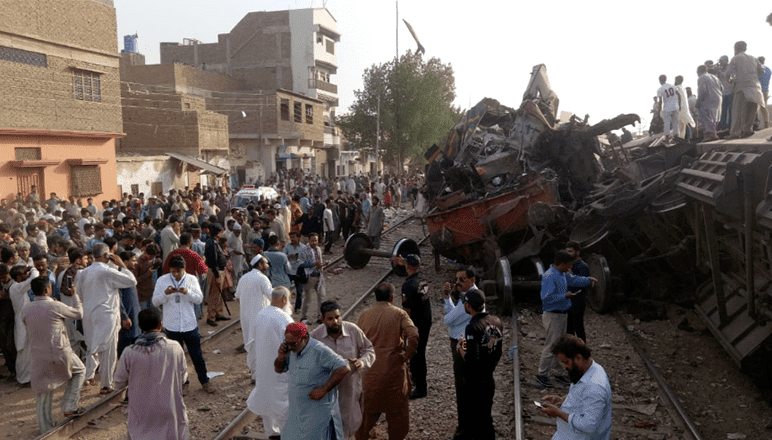 At least three people lost their lives on Thursday when a passenger train collided with a freight train at Makli Shah, near the southern city of Hyderabad in Pakistan.

A driver, assistant driver and a guard were killed when a passenger train travelling to Lahore from Karachi hit a goods train that had stopped at a crossing line.

At least 20 people were immediately rushed to the local hospital and are being treated in emergency wards.

Local army rangers rushed to the scene and assisted police and firefighters in contained the crowds and containing the wreckage.

Station Superintendent Muhammad Rizwan said the Jinnah Express passenger train was travelling from Karachi to Lahore and collided with the stationary freight train near Latifabad area of Hyderabad.

And he went onto praise the work of the emergency staff and heavy contingent of Rangers and police who rushed to the scene after the accident as security officials struggled to keep bystanders safe from the wreckage as there was still the danger of the engine catching fire.

As local firefighters rushed to the scene and contained the combustible engine room bu using water and removing flammable equipment away from the wreckage.

Reports from Pakistan suggest a driver, assistant driver and a guard were killed when a passenger train travelling to Lahore from the southern port city of Karachi hit a goods train that had stopped at a railway crossing.

Train collision in Baluchistan, Pakistan killing at least three with injured in hospital

It is understood the driver and his team who were killed stayed on the train despite the imminent danger to their lives, thus saving hundreds of lives in the process.

Ishaq Baloch, a railway official from the station, said the crash occurred on the main railway track and that train services from Karachi were suspended while the wreckage was being removed.

The injured were transported to the local University Hospital’s city branch for emergency treatment.

Travel chaos ensued late into the evening for passengers who remained stranded at the Hyderabad and Kotri railway stations due to the delay until late in the evening.

Later that evening, in a video statement to address the incident, Railways Minister Sheikh Rasheed Ahmed said that the tracks had been cleared for traffic and the passengers had been sent on their way.