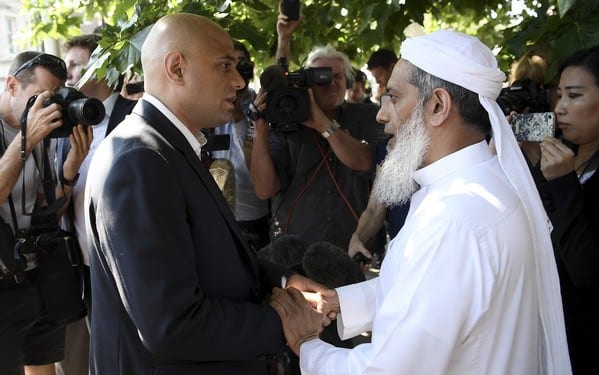 The big talking point this week is why was Home Secretary Sajid Javid dropped from the Buckingham Palace State Dinner with Trump? Yvonne Ridley reckons the answer lies in his working class and Muslim roots.

I’m not the biggest fan of Home Secretary Sajid Javid but I must confess to feeling a wee bit sad when I heard him being interviewed about why he was the only senior government minister not to attend the lavish state banquet at Buckingham Palace for Donald Trump.

He did sound rather forlorn when asked why he was not invited. The Muslim heritage minister, son of a Pakistani bus driver, told BBC Radio 4’s Today programme: “I don’t know. I’ve asked but I was just told that normally home secretaries aren’t invited so I don’t know.”

Sensing a headline story about to break, he was asked to explain further about how he felt and replied: “I don’t like it for the reason you just said. It is odd. My office did ask No 10 and they said no, so you would have to ask No 10 why they made that decision.”

If Downing Street did tell him home secretaries are not normally invited then that is a blatant lie. Thanks to a tweet by former Home Secretary Jacqui Smith we now know she “went to every state banquet for visiting leaders as Home Secretary.”

Was Javid bounced off the list because of his skin colour? Sorry but it’s a relevant question because a whole raft of white Tories shimmied along to Buckingham Palace including Theresa May, her deputy David Lidington, Philip Hammond, the chancellor, and international trade secretary Liam Fox.

Even May’s husband Philip got a seat at the table but there was no room for poor old Javid. Did he not get an invite because of his Muslim background? Again a valid question since the Tory Party is riddled with institutional Islamophobia – we know this thanks to the one-woman campaign by the fearless Baroness Sayeeda Warsi.

She reached the highest position of any Muslim in the UK Government when David Cameron appointed her as a Cabinet Minister in 2010 quitting on a point of principle in 2014 over the UK Government’s lack of criticism over the brutal Israeli war on Palestinians in Gaza.

If anyone can speak with authority about the casual racism which still blights the Conservative Party today, I guess it is Baroness Warsi, author of The Enemy Within; Warsi draws on her own unique position in British life, as the child of Pakistani immigrants, an outsider, who became an insider, the UK’s first Muslim Cabinet minister, to explore questions of cultural difference, terrorism, surveillance, social justice, religious freedom, integration and the meaning of ‘British values’.

Once that Javid has more time to himself (very soon, I expect he has no chance of lasting long in the Tory leadership race) I suggest he buys a copy of the book and reads it.

Of course, there could be another explanation, why the home secretary was not invited to the dinner hosted by the Queen. Donald Trump did endorse the extreme views of far-right organisation Britain First.

That support back in November 2017 prompted Javid to challenge the racist bigot and Islamophobic Trump in the following tweet: “So POTUS has endorsed the views of a vile, hate-filled racist organisation that hates me and people like me. He is wrong and I refuse to let it go and say nothing.”

Should that tweet be the reason then it means Trump acolytes have intervened and told 10 Downing Street to knock the home secretary off the invite list. However, since he did meet the US president during the D-Day commemorations in Portsmouth that theory now seems unlikely.

The guest list for the lavish banquet was drawn up by Buckingham Palace, with input from the government and also from the American embassy. Now if, as Jacqui Smith says, the Home Secretary is automatically invited to such events, then it means someone, somewhere made an effort to remove Sajid Javid from the list.

Who doesn’t like brown folk, Muslims or sons of Pakistani bus drivers? Obviously a racist, Islamophobic, anti-working class bigot. Sorry to say this, but looking at those who run Downing Street these days suspicion falls on quite a number of white, pale, stale politicians and their equally discriminatory apparatchiks.

I see Harun Khan, the Secretary General of the Muslim Council of Britain, has waded into this poisonous arena and responded: “As the Conservative Party elects its next leader, it is crucial that it gets to grips with Islamophobia before it takes further hold.

“We also caution against leadership candidates from the temptation to take the lowest common denominator in order to gain votes. Talk of speaking ‘directly’ should not be an excuse to scapegoat minorities as some candidates have done in the past.”