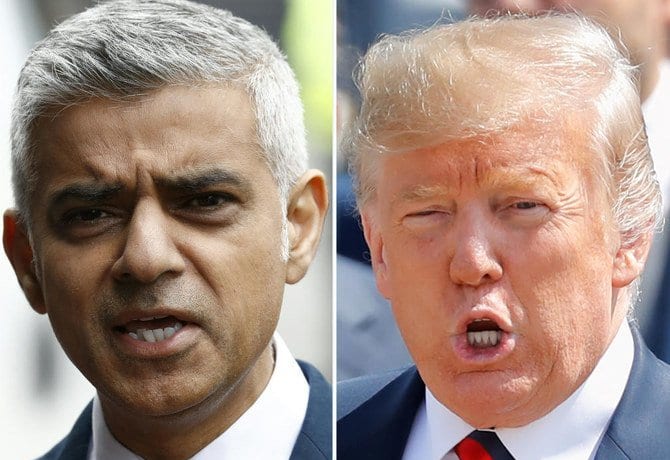 Trump’s “childish insults” were “beneath the President of the United States.” – especially in Ramadhan

President Donald Trump met with Queen Elizabeth II Monday during a two-day visit to Britain that’s meant to strengthen ties between the two nations, although the trip was immediately at risk of being overshadowed by Brexit turmoil and a political feud with London’s mayor.

Trump and first lady Melania Trump flew to Buckingham Palace in Marine One, landing on a lawn where they were greeted by Prince Charles and his wife Camilla. They received a royal gun salute as they walked to the palace where the queen greeted the president with a smile.

Trump has history with the Pakistani Mayor of London and Khan supporters have previously accused Trump of being racist against London’s first Muslim mayor and on this occasion, he began in a similar fashion.

The president’s plane had not even touched down when he tweeted that Sadiq Khan, who has been highly critical of the red-carpet welcome laid on for Trump, had done a “terrible job”.

“@SadiqKhan, who by all accounts has done a terrible job as Mayor of London, has been foolishly ‘nasty’ to the visiting President of the United States, by far the most important ally of the United Kingdom,” Trump said on Twitter shortly before Air Force One landed at Stansted Airport near London.

“He is a stone-cold loser who should focus on crime in London, not me.”

He also went on to say the Mayor of London reminded him of a previous Mayor of New York, except he was only half his height.

The US president added: “In any event, I look forward to being a great friend to the United Kingdom, and am looking very much forward to my visit.”

The Mayor of London Sadiq Khan had previously posted a link on Twitter by ‘ELLE’ where he outlined that London did not share the values of the American President.

Mayor of London, @SadiqKhan has a message for @realDonaldTrump on his arrival to London about how women ought to be treated globally. 'Dear Trump…' https://t.co/hJ5uhS9wU6 pic.twitter.com/MwlwJu5Lpf

Khan had earlier criticized Trump over the weekend, comparing his language to that of a 20th-century fascist. A spokesperson for Khan said Trump’s “childish insults” were “beneath the President of the United States.”

Especially, since today marked the last day of the Muslim holy month of Ramadhan when the President could have extended an ‘Eid Mubarak’ message to thaw his feud with the Pakistani born Mayor of London.

Khan has led the opposition to the three-day visit, condemning Trump’s “divisive behaviour” and saying he was “one of the most egregious examples” of a growing global threat from the far right.

Trump tries to muscle in on the NHS

Jeremy Corbyn also stepped in to defend the Labour Mayor of London, by tweeting that today’s protests are an opportunity to stand with those that America has attacked around the world.

Tomorrow's protest against Donald Trump's state visit is an opportunity to stand in solidarity with those he's attacked in America, around the world and in our own country – including, just this morning, @SadiqKhan.

The protests in London today is expected to draw large crowds and will see the crowd head towards parliament after midday.