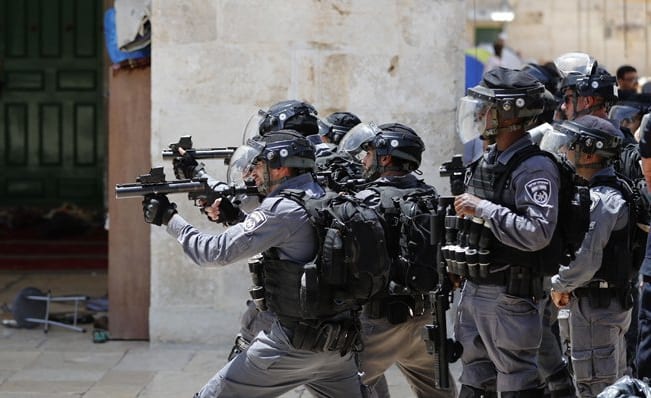 Israeli police clashed with Palestinian worshippers at a highly sensitive Jerusalem holy site on Sunday as an Israeli holiday coincided with the final days of the Muslim holy month of Ramadan.

Clashes broke out between Palestinians and Israeli police on Sunday after ultra-religious Jews were allowed to visit the Haram Al-Sharif compound in Jerusalem’s Old City at the end of Ramadan for the first time in three decades.

The decision to allow them on to the site sparked condemnation from Jordan and the Palestinians, who warned that the decision could spark violence across the region.

Hundreds of Jews were celebrating Jerusalem Day, which marks Israel’s victory in the 1967 Arab-Israeli War and its capture of East Jerusalem, which it then occupied and later annexed in a move not recognised by the international community.

They were led by far-right Jewish Rabbi Yehuda Glick.

Netanyahu struggles to form a government forcing another election

Jewish visits to the site holy to both religions angered Muslim worshippers at the Al-Aqsa mosque compound. Police claimed that the protesters barricaded themselves in the mosque, from where they threw stones at forces who “dispersed” them.

On the other hand, the Muslim Waqf organisation, which oversees the site, said police used rubber bullets and pepper spray, adding that seven people were arrested and 45 were wounded.

Jews revere the site but cannot pray there. They are allowed to visit Al Aqsa on occasion during limited hours, but take a different route through the compound. They are banned from showing any religious symbols.

Such a decision, made by Israeli authorities, is rare and Sunday’s tour under the protection of Israeli police was the first in three decades.

Palestinian news agency Wafa said that several Muslim worshippers were injured by Israeli police after they responded to “Jewish fanatics performing a provocative tour of the holy Al Aqsa Mosque”.

It said that “hardcore Jewish organisations” were calling on supporters to organise provocative visits to the compound.

Jordan, the custodian of the compound, slammed the “provocative Israeli policies” after the clashes.

“We unequivocally condemn the continuation of Israeli violations against Al Aqsa, by the break-in of extremists in a defiant manner with the backing of security forces,” the Jordanian Foreign Ministry said.

It said that police shut the mosque’s doors and chained them.

The clashes took place as Israelis marked Jerusalem Day, which commemorates the country’s capture of the city’s mainly Palestinian eastern sector in the 1967 Six-Day War.

This year’s holiday coincided with the final days of Ramadan, the Muslim month of fasting.

The Al-Aqsa compound, known to Jews as the Temple Mount, is located in east Jerusalem and its status is one of the most sensitive issues in the Israeli-Palestinian conflict.