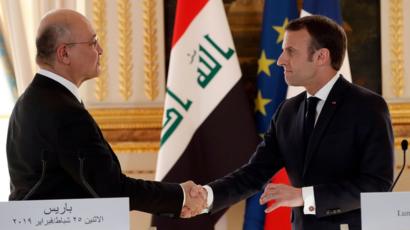 Protests over French Nationals sentenced to death in Iraq

Foreign Minister Jean-Yves Le Drian on Tuesday said France was intensifying diplomatic efforts to prevent four of its citizens being executed in Iraq after they were sentenced to death for belonging to Daesh.

Iraqi court officials have said the four French citizens have been sentenced to death by hanging.

It is not unusual to see French nationals have been radicalised and targeted by Daesh and labelled as easy targets. A huge population of Muslims in France live in poor neglected and violent slums in Paris and are easily impacted by the idea of hope.

Easy targets from social media targeting this minority group who have been neglected for decades. Ignored by the French Government despite reports suggesting the need to act.

And Daesh use that to attract them to an idea of belonging to to cause, that values them.

The Iraqi government has not publicly responded to the requests of the French foreign minister.

In total thirteen French citizens have been accused of fighting for the Islamic State group or Daesh and are to be tried in Iraq rather than face charges back home in France.