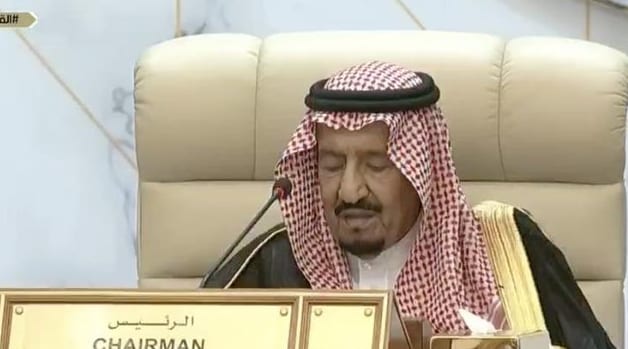 Saudi Arabia’s King Salman attacked the Iranian regime and urged the Arab states to confront it’s “criminal” actions at emergency summits in the holy city of Makkah, from Gulf and Arab states, including Qatar, with the exception of Iraq.

The summits follow the comments of  US National Security Advisor John Bolton said Iran was almost certainly behind this month’s sabotage of four ships, including two Saudi oil tankers, off the UAE coast.

The Arab League responded and heads of nations issued a final communique demanding that the Iranian regime must stop funding terror and to abide by commitments it has made.

The leaders condemned the sabotage of four commercial ships in the Emirates, which has escalated tensions in the region and precipitated a summit in the Muslim holy city.

They asked the international community to stop Iran from obtaining nuclear capabilities.

Saudi Arabia, a staunch US ally, also faces stepped-up drone attacks from Iran-aligned Huthi rebels, one of which resulted in the temporary shutdown of a major oil pipeline.

The monarch also called on the international community to use “all means” necessary to contain Iraq’s power.

Saudi Arabia’s King hosted a summit, which will be followed by the third meeting on Saturday of heads of state from Islamic nations, and aims at developing a unified stance of Muslim leaders on rising tensions in the Gulf.

Jordan’s King Abdullah II: The security of Gulf countries is the main pillar for the stability of the region. We stand by our Arab brothers to defend their interests and security.

But Iraq, caught in the middle of its two allies, the US and Iran, opposed a final statement released by Arab countries, which condemned Tehran’s behaviour in the region.

Iraq, which has offered to mediate between Washington and Tehran, recently warned of a risk of war amid escalating tensions.

Many analysts claim these tensions and the unification of the Arab and Gulf regions suggest that an attack on Iran is imminent.

The preamble to war

Stepping up the war of words on Thursday, US Secretary of State Mike Pompeo said that Iran was trying to raise global energy prices through the attacks on oil installations.

The US has beefed up its military presence in the region, with the deployment of an aircraft carrier, B-52 bombers and 1,500 additional troops.

Bolton, however, said the extra US forces were sent to the Middle East as a “deterrent” and that Washington’s response would be prudent.

“We definitely desire a change in the (Iranian) regime’s behaviour,” Brian Hook, US Special Representative for Iran, said Thursday.

Regional tensions have grown since US President Donald Trump’s administration reimposed sanctions against Iran after Washington unilaterally pulled out of a multilateral 2015 nuclear accord signed with the Islamic republic.

The Gulf and Arab League emergency summits kicked off on Thursday in Makkah for the start of a trio of high-level summits after Saudi Arabian King Salman convened the gatherings earlier this month.

The Organization of Islamic Cooperation (OIC) summit will be held later Friday, entitled the Makkah Summit: Hand in Hand Towards the Future (Together towards the Future). Which Pakistani PM Imran Khan will attend.

Qatar was also invited to regional summits, a first since the rising tensions between the middle eastern neighbours.