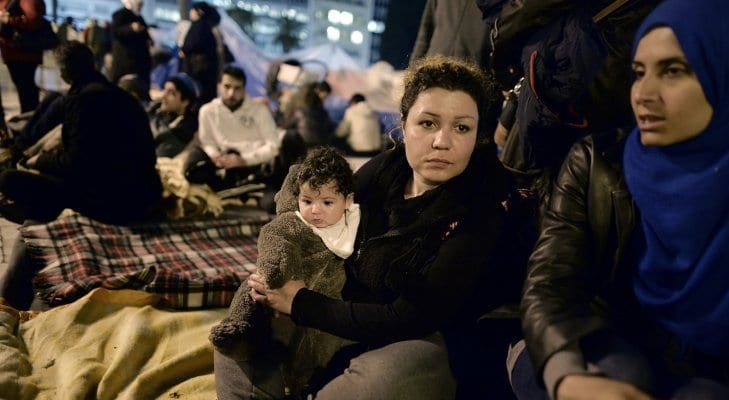 This is not a time for self-serving politicians.
Regardless of how complex the situation is, three million Syrians are looking for a lifeline.

If Idlib was the last remaining territory in rebel hands and falls under the latest onslaught it will trigger the worst humanitarian disaster of the Syrian war to date.

Before the civil war, Idlib had a population of around one million people but when I visited as the first British journalist this year, it had become home to three million souls.

There is simply nowhere else for them to run or hide from Bashar al Assad unless Turkey, which has already given refuge to 3.6 million other Syrians, reopens the border.

The cold reality is that the fate of three million now lies in the hands of 15 men and women who make up the United Nations Security Council.

Their job is supposed to be the maintenance of international peace and security but to be brutally frank they have failed miserably so far with countries like Russia holding a veto.

In the meantime, new evidence reveals the ceasefire is no longer and Assad’s brutal regime is committing war crimes by deliberately targeting schools and hospitals in Idlib. More than 20 have been bombed, shelled and destroyed by Assad and his allies Iran and Russia in as many days.

Despite previous promises and assurances by the UN Security Council to protect civilians, it appears that the same kind of war crimes that were carried out in Aleppo, Eastern Ghouta and Raqqa are being repeated in Idlib as Assad’s ruthless army and its allies attempt an all-out offensive in the province.

I found that the fragile ceasefire brokered by Turkey was barely holding with Russian aircraft circling overhead when I visited Idlib for WTX News earlier this year. The ceasefire is no more as the regime hurls chemical weapons, cluster and barrel bombs in civilian areas.

Amazingly, it seems that victory is not being delivered on a plate for Assad, as has been predicted by some of his defence experts. One of the reasons for this is the coming together of rebel forces who have now formed a loose coalition – what a pity they hadn’t done this at the outset.

Why are we seeing Russian special forces in the Hama plains? All rebel factions are united in one operations room and ready for a fight.

All this and more on OGN Perspective. pic.twitter.com/HW0QwxNKYm

This show of unity in the sprawling province, which is about the size of neighbouring Lebanon, has already produced a number of small victories for the rebels according to US journalist Bilal Abdul Kareem, one of the founders of On The Ground News based in the province.

Abdul Kareem, who has been targeted many times since he first began covering the conflict, suffered another injury just the other day as he covered the frontline action in Habeet village outside Khan Shaykhoon. Working alongside other journalists, including colleagues from Sky News, he shared footage of the atrocities carried out by Assad.

While there he was hit by shrapnel but, using his trademark gallows humour was quite stoic about the attack. “I guess when you’re the only black journalist on the ground in rebel-held Syria then I’m an easy target for the Russian drones to spot,” he said.

The recent regime and Russian attacks have targeted civilians in Kafranbel, Ma’arat, Hurma, Sheikh Mustafah, Ma’ar, Zaita and Kansafra. “These are all small villages or towns in southern rural Idlib,” explained Abdul Kareem, “containing nothing but civilians and civilian properties.”

Journalists have been targeted by the Assad regime before. Earlier this year, a US court ruled that American journalist Marie Colvin was murdered by the regime during an artillery attack on Homs in 2012. She was not just another random casualty of war. Following an exhaustive inquiry, Judge Amy Jackson ruled that she was targeted deliberately as part of the regime’s policy to target independent journalists, whom it considers to be “enemies of the state”.

Of course, it’s not just Syrians or journalists who are also being targeted by the regime. Around 350 Westerners are in Idlib helping local civilians rebuild and develop what’s left of their country beyond the grip of the government.

Using their professional skills in medicine, education, engineering, science and media, they have networked extensively with Syrians on the ground and charities back home, as well as amongst themselves, to rebuild and open schools, hospitals, playgrounds, and community hubs to help widows and orphans.

Most of these ex-pats — or “foreigners” as the Syrians call them — arrived in the war-torn country more than five years ago “for humanitarian purposes”. Their decision to stay has cost some of them their British citizenship because of the simple but toxic government narrative in Westminster that anyone leaving Britain to go to Syria can only be fighters or Daesh brides.

This has not been lost on the Syrian refugees in Idlib who believe if western governments care so little for the welfare of their own citizens then what chance do they stand of surviving the 21st century’s most brutal civil war to date?

“However he is also being squeezed from all sides. Russian gas heats Turkish homes in the winter months and that’s just one of the benefits from a good relationship with Moscow. Meanwhile, relations between Ankara and Washington are not great even though Turkey is a NATO ally of the Americans, although it’s not being treated like one. The situation is complex.

Regardless of how complex the situation is, three million Syrians are looking for a lifeline. This is not a time for self-serving politicians and their kingsize egos, it is a time for compassion, humanity and a real chance for the UN Security Council to stand up for its responsibilities.