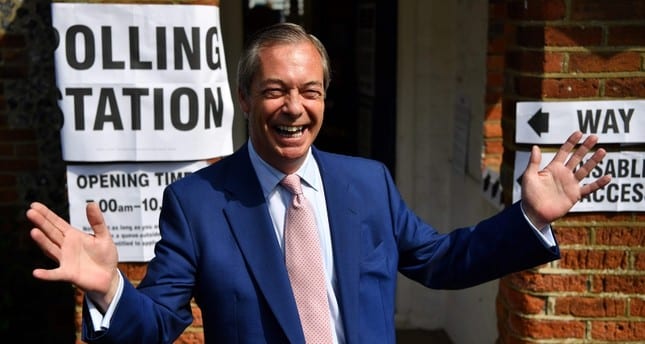 Far Right set for gains as UK and European elections

The UK is electing 73 MEPs from across 12 regions – 10 have so far declared. The Brexit Party have 28 MEPs winning 32% of the vote and are the largest party in 9 regions

The Lib Dems topped the poll in London and have won 15 MEPs, gaining 14, taking hardline conservative regions like Kensington and Chelsea.

This has proven to be a dramatic night of European election results, in which both Labour and the Conservatives have suffered a severe rebuff from the voters.

The Conservatives have just 3 MEPs, down 15 and are in 5th place and the most startling fact from this election is the conservative party failed to come top in votes in any region.

The Conservative Party has been widely rejected by the electorate and is heading for fifth place with maybe less than 10% of the vote, which shows how the country used this as a protest vote.

The Country has been dominated by The Brexit Party with sprouts of Lib Dem yellow and Labour red.

However, these EU elections have shown, whilst the Conservatives and Labour squabble in parliament the well funded, hard campaigning Brexit Party has placed itself as the ‘alt option’.

Labour has 10 MEPs elected this time, down 8 and their vote share has fallen by 11 percent. The Green Party have won 7 MEPs, up 4.

In Scotland the SNP is forecast to win 3 MEPs, Brexit Party 1, Lib Dems 1 and Conservatives 1.

If we assess these elections as Brexit v Reamainers, the combined tally for the two parties in favour of a no-deal Brexit, The Brexit Party and UKIP amounts to 35%.

The combined tally for the pro-second referendum parties is 40%.

Change UK spokesman Chuka Ummuna has defended the party’s performance in its first election. Despite not winning any seats, the newly-formed party has gained more than 570,000 votes (3.4%) so far – with Scotland still to declare.

Prime Minister Theresa May’s Conservative Party came third in her own constituency in Maidenhead, Berkshire, losing to the Brexit party and Liberal Democrats.

And Labour leader Jeremy Corbyn saw his party come second to the Liberal Democrats in his own Islington constituency.

Far-Right parties have been moderately performing slightly better than before, despite the amount of anti-fascist demonstrations across the EU, it is evident that the Far right are well funded and as the Brexit party shown in the UK, they campaign hard and well funded.

There were some notable advances – such as the Lega in Italy (up 27 points on 2014) and the Justice of Law Party in Poland (up 11 points). But in Denmark, the Danish People’s Party is down by 16 points, and in Lithuania, the Party of Order and Justice is down by 11 points.

The right-wing League emerged last night as Italy’s largest party in exit polls at the European elections, boosting the chances of Matteo Salvini of leading a hard-right nationalist bloc in the European parliament.

Salvini is the one who wanted to turn away the migrant ships off the coast of Italy and regularly reference Nigel Farage in his victory speech.

Geert Wilders freedom party in the Netherlands has not won any seats and neither has the People party in Denmark.

The EPP and S&D are still the two most dominant parties in the UE but they no longer have a majority, which means the far right have increased their disruptive influence across the EU Bloc.