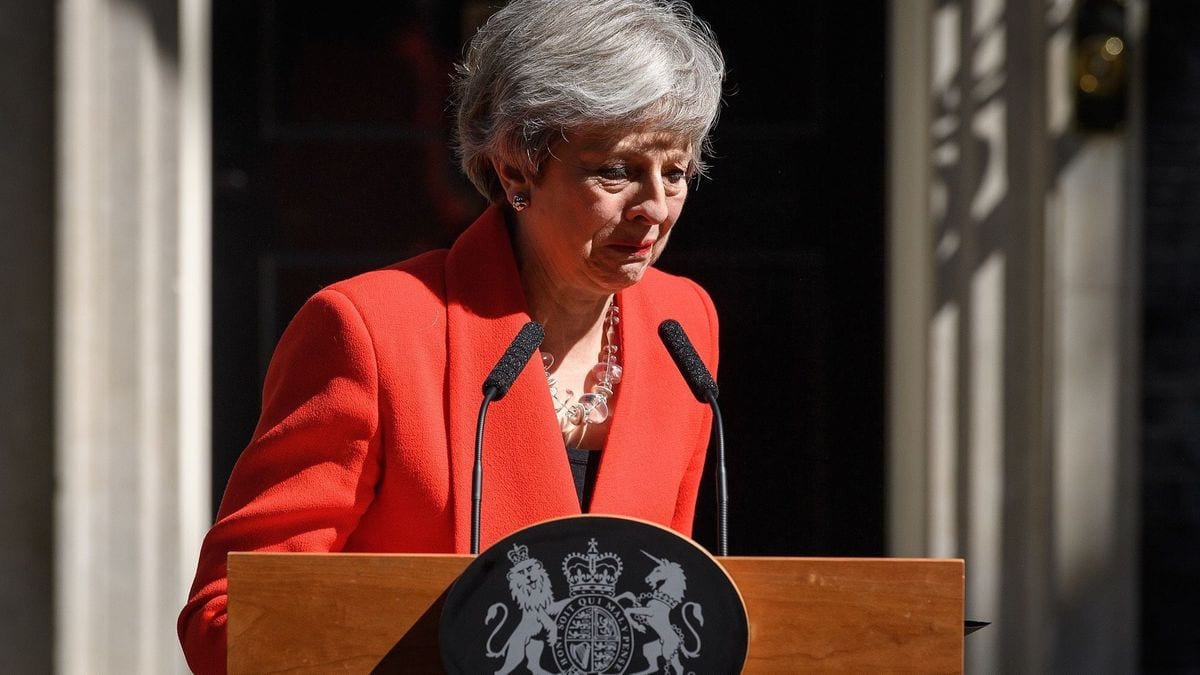 So it’ finally happened after months of speculation and weeks of an intense media frenzy – Theresa May is stepping down on Friday, June 7.

Good riddance, I say! Now we can look forward to an outbreak of unbridled Tory fratricide as the leadership contest unfolds with blond bombshell Boris Johnson already being tipped as the next occupant of 10 Downing Street!

In the meantime, we’ll be inundated with tributes eulogising Theresa May but let’s not rewrite history or get soppy or sentimental about the departure of this wretched vicar’s daughter and her moral sense of duty.

Let’s just remember the great office of Prime Minister was not forced upon her, she applied for the job in the first place and was very determined to seize it.

Her outgoing speech has been described as her finest but I just heard more boring platitudes echoing her first speech outside the doors of Number Ten.

Fighting back tears, she made her exit delivery on Friday morning following a meeting with Sir Graham Brady, the chair of the 1922 Committee of Tory backbenchers.

Now we await one of the most vicious political battles as the process to select a new Tory party leader begins, it is guaranteed to put the shenanigans of Games of Thrones in the shade.

Nominations will close on June 10 and then we’ll have to endure a number of gladiatorial rounds of voting by Tory MPs before the final selection is put to whatever’s left of the dwindling party’s members.

Their final votes will be cast and the result announced by the time parliament rises for the summer in mid-July, but you can be sure whoever is the new leader he or she will not call a General Election.

The Tory Party is in such a pitiful state these days – five million Tories were remainers – that I feel we are watching it in its final death throes.

Some critics say that May never served the country she says she loved but, instead, worked solidly for three years to undermine the biggest ever democratic vote – the Brexit Referendum – in Britain’s political history.

Whatever your view on Brexit she turned the UK into a laughing stock overseas over the issue.

However, in my view, the biggest shame she brought upon Britain was spelt out just a few days ago in a hard-hitting report by a United Nations poverty expert who likened the government’s austerity program and welfare overhauls to a version of a Victorian workhouse.

Philip Alston, the UN special rapporteur for extreme poverty, concluded that cuts to public services in Tory Britain since 2010 have resulted in “tragic social consequences.”

“Much of the glue that has held British society together since the Second World War has been deliberately removed and replaced with a harsh and uncaring ethos,” Alston said. “A booming economy, high employment and a budget surplus have not reversed austerity, a policy pursued more as an ideological than an economic agenda.”

In short, I’m not sad to see the back of Theresa May but I do dread what we might get instead – smug Jacob Rees Mogg, the MP for the 17th century or serial braggadocios prat and liar Boris Johnson, or the creepy, obsequious and insincere Michael Gove whose cloying humility is bile-inducing.

Glad May has gone but dreading what June could deliver!