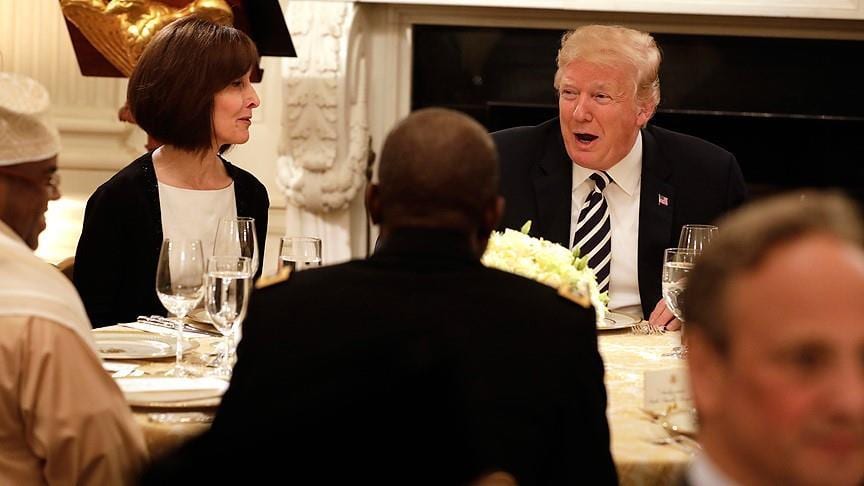 Trump hosts his first Ramadhan Iftar in the White house

President Donald Trump embraced the Muslim holy month of Ramdhan by hosting an iftar dinner at the White House on Monday with an array of Muslim guest including American Muslims and foreign dignitaries.

But these guests did not include high profile Muslims Ilhan Omer and Rashida Tlaib, The first Muslim women of their faith to be elected to Congress.

The dinner was attended by Turkish ambassador Serdar Kilic and members of the diplomatic corps representing nations with large Muslim populations.

During the end of his remarks, he wished every Muslim in America and around the globe Ramadan Kareem.

The President said, “Ramadhan is a holy month for Muslims here in the United States and all across the world … it is a time when people join forces in pursuit of hope, tolerance and peace.”

During Ramadan, Muslims fast from dawn to sunset and they break the fast with a meal called an iftar. Eid al-Fitr, which signifies the end of Ramadan, is expected to begin June 3. It is based on the observation of the new moon by local religious authorities.

In his remarks, the president also recalled recent attacks on places of worship, citing the New Zealand mosque attacks, the attacks on Christians in Sri Lanka and the synagogue attacks in Pittsburgh and California.

“In their blessed memory, we resolve to defeat the evils of terrorism and religious persecution so that all people can worship without fear, pray without danger, and live by the faith that flows from their heart,” Trump said.

“Wish all the people around the world, Ramadhan Kareem,” he said, concluding his speech.

Trump caused controversy last year by not holding a Ramadhan iftar last year, a move that was widely criticised. It was an initiative started by Hilary Clinton and all the presidents since have honoured the tradition.