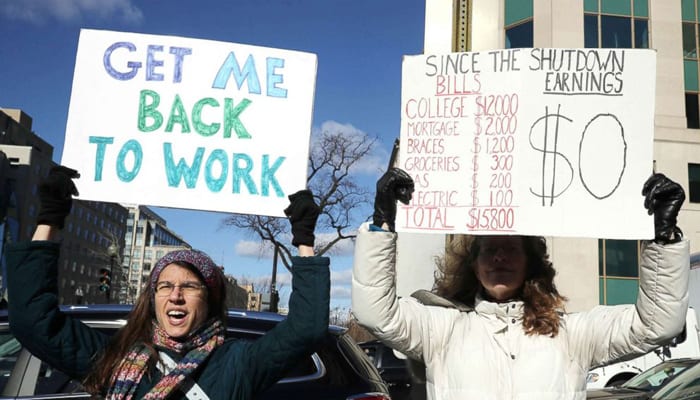 The information presented by Trump’s team is skewered

The US government shutdown that has left 800,000 federal employees without salaries as a result of President Donald Trump´s row with Democrats over building a Mexico border wall entered a record 22nd day Saturday.

The standoff has turned into a battle of political egos, particularly for Trump, who came into office boasting of his negotiating and deal-making powers

However, Trump is not short of political enemies in his party or in both houses and a stiff resilience to the autocratic style of his presidency. Democrats particularly seem determined to prevent a president from getting a win.

Away from the drama both Democrats and Republicans agree that the US-Mexican frontier presents major challenges, ranging from poor migrants seeking new lives and thousands wishing to join family living in the US.

The Democrats´ refusal to approve $6 billion demanded by Trump for the wall project has paralysed Washington, with the president retaliating by refusing to sign off on budgets for swaths of government departments unrelated to the dispute.

As a result, workers a massive 800,000 civil servants such as FBI agents, air traffic controllers and museum staff, did not get paid on Friday.

The partial shutdown of the government became the longest on record at midnight Friday (0500 GMT Saturday), when it overtook the 21-day stretch in 1995-1996, under president Bill Clinton.

Trump on Friday backed off a series of previous threats to end the deadlock by declaring a national emergency and attempting to secure the funds without congressional approval.

“I´m not going to do it so fast,” he said at a White House meeting.

Trump described an emergency declaration as the “easy way out” and said Congress had to step up to the responsibility of approving the $5.7 billion.

“If they can´t do it… I will declare a national emergency. I have the absolute right,” he insisted.

Until now, Trump had suggested numerous times that he was getting closer to taking the controversial decision.

But the majority of the country believes that Trump’s administration is using skewered data to justify the building of the Wall.

But Trump himself acknowledged in the White House meeting that an attempt to claim emergency powers would likely end up in legal battles going all the way to the Supreme Court.

Opponents say that a unilateral move by the president over the sensitive border issue would be constitutional overreach and set a dangerous precedent in similar controversies.

But Trump accused the Democrats of only wanting to score points against him with a view to the 2020 presidential elections.