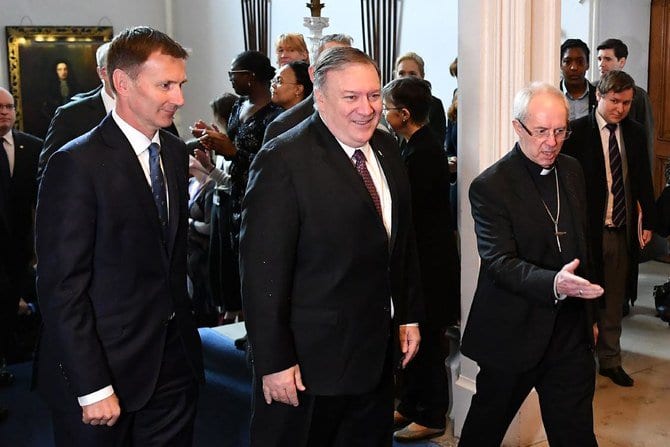 US Secretary of State Mike Pompeo visited Britain on Wednesday to pitch a post-Brexit ‘special relationship’. His motivation is driven on leveraging favourable terms in support of furthering new sanctions on Iran.

Iranian officials have said it may stop complying with some parts of the big-power nuclear deal that the United States withdrew from a year ago.

US President Donald Trump says he will withdraw the US from an Obama-era nuclear agreement with Iran.

Going against advice from European allies, he said he would reimpose economic sanctions that were waived when the deal was signed in 2015.

A deal which Israel had pushed the Trump administration to withdraw from, which in the eyes of the international community was acceptable and indeed honoured.

His shift to a more vehemently anti-deal view tracks closely with Mr Trump’s full-throated support of Benjamin Netanyahu and the hard-line Israeli side of Middle East peace negotiations, after earlier suggesting he could be an impartial “deal-maker” in the region.

In mid-2017, Trump went on to say, whilst speaking to an audience at the American Israel Public Affairs Committee annual conference, that his “number one priority is to dismantle the disastrous deal with Iran” and ensure the Iranians cannot threaten Israel’s supremacy in the region.

Pompeo arrived in London after an unannounced visit to Iraq where he set out US security concerns amid rising tension with Iran. He arrived in the UK with a purpose to lobby for Iran, in reference to a recent state visit by Benjamin Netanyahu, where the Israeli leader pushed the Trump administration to support Israel in isolating Iran.

The US military said on Tuesday that B-52 bombers would be among the additional forces being sent to the Middle East to counter what President Donald Trump’s administration says are “clear indications” of threats from Iran to US forces there.

Mike Pompeo is here to dangle the carrot to the British to do the same, acknowledge the rising threat of Iran and support the state of advancement of security around the mainly Shia nation.

In London, Pompeo was due to meet Prime Minister Theresa May, who has been grappling for three years with a political crisis over Britain’s planned exit from the European Union.

Pompeo met Foreign Secretary Jeremy Hunt and the spiritual leader of the Church of England, Archbishop of Canterbury Justin Welby, to discuss religious freedom and the persecution of Christians, and was due to meet Hunt again later.

Brexit and the unpredictable Trump presidency have strained ‘the special relationship’ between the world’s preeminent power and its main European ally.

The US secretary of state is on a mission to agree on the particulars of the post-Brexit deal before President Trump arrives later in June. Hoping that by President Trump can sign a deal and announce it on twitter.