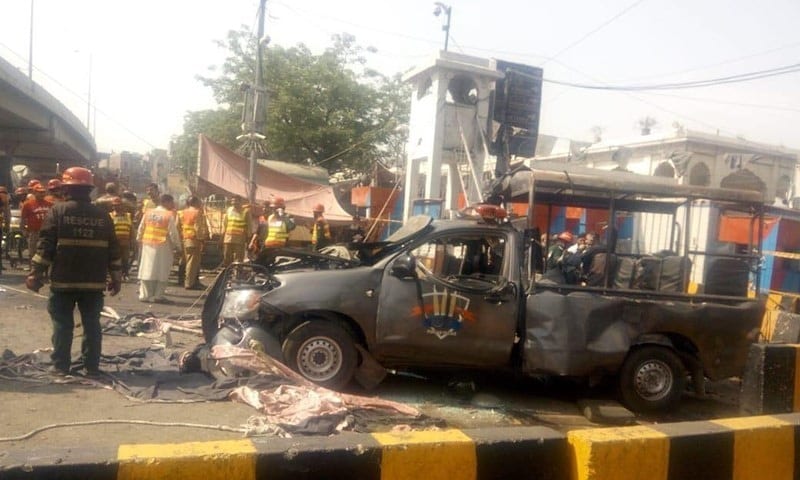 The impact of the blast shattered the windows in nearby vehicles and buildings. throwing bystanders and debris into the air.

A terrorist attack on a Muslim shrine in Pakistan has killed 12 people including three police officers and leaving hundreds injured in a suicide blast outside one of Lahore’s holiest shrines ‘Data Darbar’.

According to police reports, the blast targetted a van carrying the Elite Force of Punjab Police.

The impact of the blast shattered the windows in nearby vehicles and buildings. throwing bystanders and debris into the air.

A police source said that 7kgs bomb explosives were used in the blast that has killed 12 and left a further four in critical condition.

Thousands of worshipers and tourists gather daily at the holy shrine and Mosque and on Wednesday morning worshipers had gathered to celebrate the Muslim holy month of Ramdhan.

A heavy contingent of police, Counter-Terrorism Department and forensic officials collected evidence from the site of the attack.

Entry to the Data Darbar was sealed in the aftermath of the blast, and Zaireens were asked to turn away as police conduct an initial investigation into the incident.

Lahore is one the largest and most densely populated cities in Pakistan, It was provisionally the capital of the country, however, because it is so close to the Indian border, the capital was moved to Islamabad.

Data Darbar, one of the largest Sufi shrines in South Asia that dates back to the 11th century, has been targeted previously, in a 2010 suicide attack that killed more than 40 people.