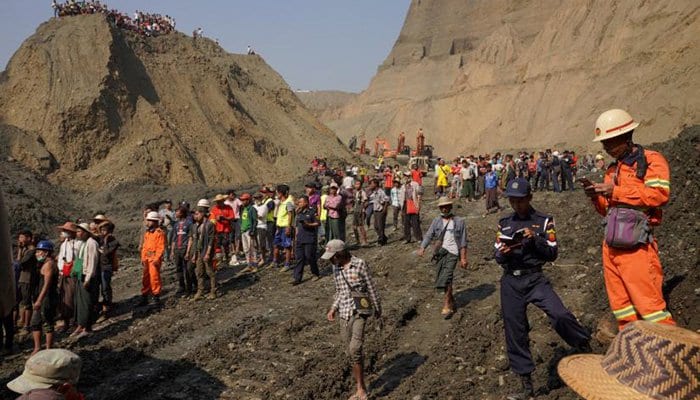 landslide in northern Myanmar engulfed jade miners while they were sleeping, the latest deadly accident in a notoriously dangerous industry.

More than 50 people are feared to have been killed in Myanmar when jade miners and machinery were buried under a landslide on Monday.

The landslide in northern Myanmar engulfed jade miners while they were sleeping.

So far three bodies had been pulled from the debris, in the aftermath of the landslide but search and rescue workers have been working through the night to get to the rest.

The Ministry of Information confirmed the accident and number of missing, adding that the area was mined by Myanmar Thura Gems and Shwe Nagar Koe Kaung companies.

Myanmar Thura Gems director Hla Soe Oo told AFP by phone he was on his way to the site and had no further details.

A spokesperson for the companies killed all hope of reaching any survivors alive and stated “They won’t survive. It is not possible because they are buried under mud… It is very difficult to retrieve the bodies.”

Local media shared images that showed the walls of the mine stretching vertically a couple of hundred meters above a vast pool of mud, revealing only the tops of two yellow excavation vehicles.

Deadly landslides and other accidents are common in the poorly regulated mines of Hpakant.

Dozens die each year in landslides caused by jade mining, a poorly regulated industry rife with corruption and sandwiched between the country’s borders with China and India.

Environmental advocacy group Global Witness put the value of jade production in Myanmar at about $31 billion in 2014.

The jade industry is largely driven by insatiable demand from neighbouring China, where the translucent green gemstone has long been prized.