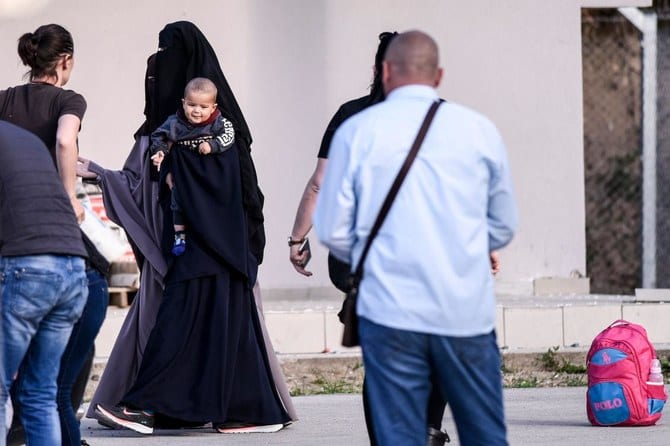 In 2015, Kosovo adopted a law making fighting in foreign conflicts punishable by up to 15 years in jail.

Kosovo police and prosecutors have interrogated several of the women who returned from Syria by plane on Saturday, lawyers who took part in the questioning said on Monday.

Kosovo brought back 110 of its citizens from Syria, including 32 women, 74 children and four militants who had gone to fight in the country’s civil war.

The four fighters were immediately arrested and detained for 30 days awaiting questioning, while women and children were sent to the Foreign Detention Center in the outskirts of Pristina.

A number of visitors were seen in front of the Foreign Detention Center on Monday morning, hoping to see relatives. Children, some small girls wearing hijabs, were outside in the sunny weather playing soccer with police officers.

Doctors were constantly entering and leaving the buildings to carry out medical checks on the returnees.

After the collapse of Daesh’s self-declared caliphate in Syria and Iraq, countries around the world are wrestling with how to handle militants and their families seeking to return.

The population of Kosovo is nominally 90 percent Muslim, but largely secular in outlook. Allegedly more than 300 of its citizens had travelled to Syria since 2012 and 70 men who fought alongside militant groups were killed.

Police said 30 Kosovan fighters, 49 women and eight children remain in the conflict zones. The government said it plans to bring back those who are still there.

Intelligence agencies in Europe are monitoring the situation and closely crosschecking all the detainees. Suspicions are arising that the returning women are using fake identities to settle in any other country that they can.

In 2015, Kosovo adopted a law making fighting in foreign conflicts punishable by up to 15 years in jail.