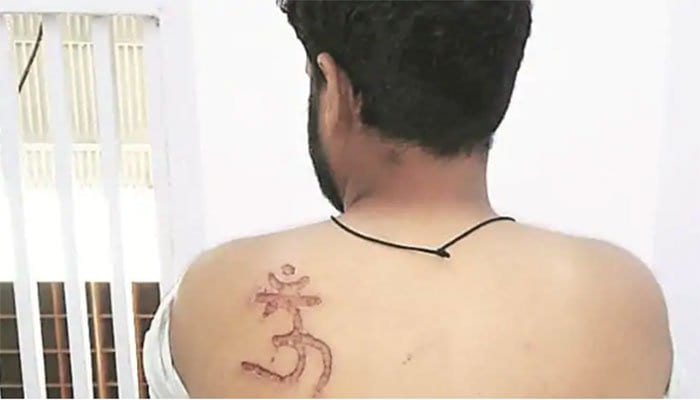 With the Indian elections, underway anti-Muslim and anti-Pakistan messages have dominated news cycles.

A Muslim inmate in detention at the Tihar prison, in India, has made dramatic claims that he was beaten and branded with an ‘Om symbol’ by jail officials inside the prison premises.

The inmate Shabbir whose alias is Nabbir told his family that he was branded with an Om symbol and was not fed for two days on April 12. He went on to describe how he was subjected to cruel and inhuman treatment by jail superintendent Rajesh Chauhan.

The rise of Islamophobia in India has become supercharged, especially since the Pakistan and India conflict earlier this year.

This conflict is still seen as a Hindu and Muslim war and it is stoked by politicians and Indian elite, despite India having a huge Muslim population.

Shabbir raised a complaint with the superintendent of the prison about the induction stove in their barracks not working properly. The accused official, Rajesh Chauhan, then allegedly began to beat Shabbir, accusing him of trying to “be a politician” and raising complaints.

Furious with rage the Chauhan and other officials began violently beating Shabbir and from what can only be described as a scene from a movie, heated the metal Om symbol and branded it on Shabbir’s back, burning it in and marking the Muslim inmate like a tattoo.

The Om Symbol is a religious Hindu symbol that portrays Om as all-encompassing, the essence of ultimate reality, and unifies everything in the universe.

His family reported the incident to his legal counsel and the barrister submitted an application to the court.

The judge has ordered the prison authorities to probe the complaint and the court said, “The allegations raised by the accused are of serious nature and required immediate intervention … a notice is being issued to DGP, Prisoner, Head Quarter, Jail No 4, New Delhi to get the medical examination of accused Nabbir conducted with immediate effect and also to make enquiry report regarding the burn imprinted ‘Om’ mark on the person of the accused.”

The court also instructed jail authorities to ensure the inmate’s safety and that he be “immediately removed from the direct or indirect supervision of jail superintendent Rajesh Chauhan”.

Director General of Tihar Ajay Kashyap told local media in India “We have ordered an enquiry into the incident. The inmate has been shifted to a different jail. He was lodged in the high-risk prison which is monitored by CCTV cameras.”

The CCTV footage will now be evaluated and the court-ordered inmate’s medical examination will be carried out. The report will be submitted in court once the enquiry is complete.

Asaduddin Owaisi, President of the All India (Muslim) Majlis, shared the news and wrote: “Everyday, a more innovative way is developed to humiliate us. To brand someone like cattle is cruel, unusual and dehumanising. We’re not chattel, we’re HUMAN. (Let’s not pretend there’s any other reason why Nabbir was branded with this specific symbol).”

With the Indian elections, underway anti-Muslim and anti-Pakistan messages have dominated news cycles. And the antipathy towards Muslims has risen in India and abroad.

Politicians, fighting for the elections, are using this issue to galvanise support. PM Modi’s BJP party have been accused of inciting racial hatred several times during the election and some candidates have been suspended for 3 days for their dangerous ant Muslim messages.