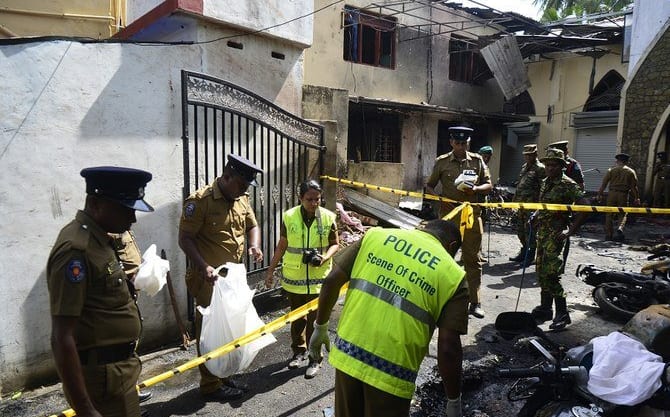 Words failed me this Easter Sunday morning as news came in about eight blasts targeting locations including churches and hotels across Sri Lanka, leaving at least 207 people dead and 450 injured.

As yet the monsters responsible have not been identified but it is obviously some group or cult as this is too large scale to be the work of random individuals.

Eight blasts were reported, including at three churches in Negombo, Batticaloa and Colombo’s Kochchikade district during Easter services.

The Shangri-La, Kingsbury and Cinnamon Grand hotels and one other, all in the capital, were also targeted.

A national curfew has been put in place “until further notice” and social media networks have been temporarily blocked.

A foreign ministry official has said at least 27 foreign nationals are among the dead.

Children were among the dead in the congregations taking part in annual Easter Sunday services at the churches when the blasts hit and a trip of five-star hotels in the heart of the capital, Colombo were also hit.

I fear at the time of writing this that the death toll will rise and while police have arrested at least seven people we still do not know who is behind this wretched attack.

It’s been ten years since the civil war ended in Sri Lanka, a country I’ve visited several times and have many friends living there. I can’t begin to imagine how they must feel.

Overwhelming response at National Blood Centre. It’s so overcrowded they cannot control the crowd. Currently they are sending back people who have come after taking down name, contact and blood group. Don’t rush there now go leisurely as the crowd subsides #LKA pic.twitter.com/EAvYyr73kH

There is absolutely no justification for targeting innocent men, women and children regardless of who they are or how they pray. My heart goes out to the grief-stricken families as well as the survivors of this Easter Sunday massacre.

So far at least 207 people have been killed and 450 hurt in explosions at churches and hotels in Sri Lanka as emergency services have been working through the rubble to search for any clues to the attackers and more dead bodies.