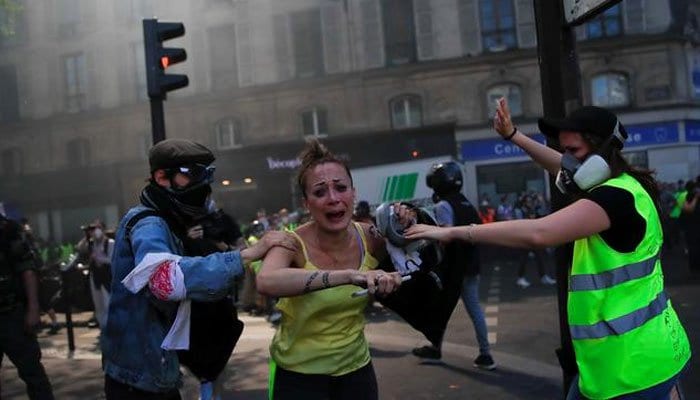 Until this issue is resolved Paris remains unsafe on the weekends, for tourists and local residents.

Clashes broke out between dozens of demonstrators and police in Paris on the 23rd Saturday of yellow-vest protests after authorities warned that rioters could return to the French capital to spark a new wave of violence.

Dozens of black-hooded demonstrators threw rocks at police and some set fire to scooters and trash cans in the centre of the French capital, according to Reuters TV footage.

Police responded by firing tear gas and stun grenades. Some officers also marched toward demonstrators to control the crowd and funnel it to Paris’ Place de la Republique, where most of the demonstrators were contained in the late afternoon.

French yellow vest protesters set fires along a march route through Paris on Saturday to drive home their message to a government they see as out of touch with the problems of the poor: that rebuilding the fire-ravaged Notre Dame Cathedral isn’t the only problem France needs to solve.

Police fired water cannon and sprayed tear gas to try to control radical elements on the margins of the largely peaceful march, one of several actions around Paris and other French cities.

According to the Interior ministry, around10,000 people were demonstrating across France, including almost 7,000 in Paris, however, sources on the ground for WTX news have confirmed that almost double that were present in Paris and across France and the ministry is downplaying the numbers.

This is more than last week’s protest but short of the record 282,000 estimated on Nov. 17, the first day of the protests.

This was one of the most violent clashes between the police and Yellow Vest protestors A car, motorbikes and barricades set ablaze around the Place de la Republique plaza in eastern Paris.

Residents described how the smell of tear gas fired by police mixed with the smoke, choking the air.

Paris firefighters who struggled earlier this week to prevent the blaze that engulfed the historic Notre Dame from collapsing quickly responded to extinguish the flames at Saturday’s protest.

Another witness described how’ one masked protester dressed in black jumped on a Mercedes parked along the march route, smashing it’s front and back windshields.’

The Yellow Vets protestors are furious that President Macron has prioritised the rebuilding os Notre Dame before the much needed social reforms.

Since the fire at Notre Dame last week, French President Macron promised to rebuild the Notre Dame as the biggest priority for France. The elite in France and globally have supported pledged millions of dollars to rebuild the historical building which has further enraged the Yellow Vest protestors.

This has been a major political issue for President Macron, in fact, it is by far the biggest challenge of his Presidency and despite making some compromises he has not been able to appease the Yellow Vest protestors.

France and especially the Champs Elysse are rising to a boiling point, with so much destruction and disruption to tourist hotspots, shops and locals businesses the French ministry has to act to control this matter. Or the frustration of the Parisians or indeed the Yellows Vest will take this city back towards the famous French revolutions.

France has tried to give the police more powers to arrest potential protestors before the weekend, with over 500 yellow vest organisers apprehended to attempt to subdue the protests, but this has not had the desired impact.

Large portions of the Paris metro network were closed and about 60,000 police were deployed across France.

The ‘Gilets Jaunes’ protests erupted in mid-November originally over fuel price hikes and the high cost of living but spiralled into a broader movement against Macron and his drive for economic reforms.

Macron is due to make new announcements next Thursday that he hopes will quash the protests once and for all. Until this issue is resolved Paris remains unsafe on the weekends, for tourists and local residents.